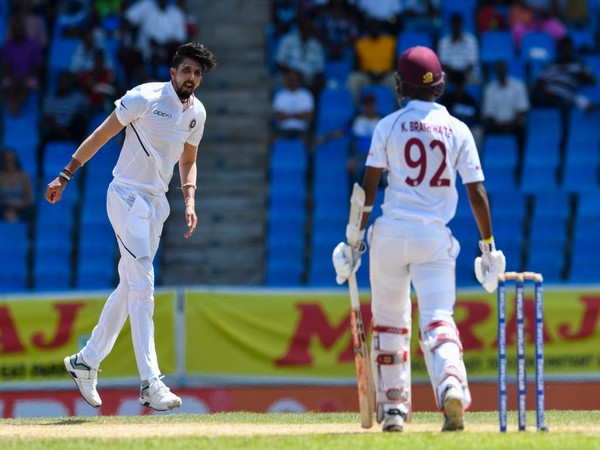 For West Indies, Kraigg Brathwaite and John Campbell opened the innings and stitched a brief 36 runs partnership for the first wicket. Campbell (23) was sent to pavilion by Mohammad Shami in the 8th over.
Shamrah Brooks joined Brathwaite in the middle and the duo added 12 runs to the total before the latter was caught and bowled by Ishant Sharma. He played a knock of 14 runs.
Brooks was also dismissed cheaply by Ravindra Jadeja and was caught by Ajinkya Rahane at first slip.
Darren Bravo and Roston Chase built a partnership of 38 runs for the fourth wicket before Brava (18) was found in front of the wickets by Jasprit Bumrah.
Chase played a knock of 48 runs before he became a victim of Sharma. KL Rahul took a brilliant catch of Chase at the square leg.
Shai Hope and Shemron Hetmyer played a knock of 24 and 35, respectively. Both lost their wickets in a span of three overs.
Hetmyer and Roach (0) both lost their wicket in the same 56th over to Sharma. Jason Holder (10) and Miguel Cummins (0) are batting unbeaten on the crease.
Ishant Sharma bagged five wickets while Bumrah, Shami, and Jadeja scalped one wicket each.
Earlier, India resumed their innings from 203/6 on day two. The team suffered an early blow as Rishabh Pant departed after scoring 24 by Kemar Roach.
Ishant Sharma joined Ravindra Jadeja in the middle and stitched a well-compiled stand of 60 runs. Sharma added 19 runs to the scoreboard before he was scalped by Shannon Gabriel. He along with Jadeja helped India to get past to 250-run mark.
Mohammad Shami failed to leave his mark on the total and departed on golden duck by spinner Roston Chase. India lost their last wicket in the form of Jadeja (58), who was departed by Jason Holder. India bundled out for 297 in 96.4 overs.
For Windies, Roach took four wickets while Gabriel scalped three wickets. Chase bagged two wickets and Holder took one wicket. (ANI)