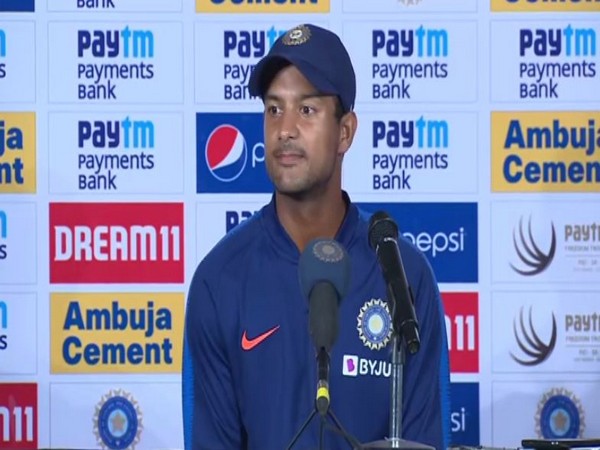 Pune (Maharashtra) [India], Oct 11 (ANI): India opener Mayank Agarwal who scored his second hundred in the ongoing Test against South Africa on Friday said that India A games have helped him to bridge the gap between domestic and international cricket.

"I think India A games really helped to bridge the gap between domestic and international cricket because the kind of teams we are facing and the kind of countries are fielding in for those games are top quality. So, you know you are almost playing against the international standard bowling," Agarwal told reporters in the post-match conference.
The 28-year-old had played 75 list A matches in which he had 3605 runs with an average of 48.71. While in his 55 games long first-class career he scored 4389 runs with the highest score of 304 runs.
"Obviously continuing what I did in domestic cricket is what I want to do is try and get as many runs for the side in the top of the order. I think it is very important for the guys who get set to get big runs. I'm very happy that I got two centuries," he added.
Agarwal played a knock of 108 runs before gifting away his wicket to pacer Kagiso Rabada. He praised skipper Virat Kohli who scored an unbeaten 254 runs, his highest score so far.
"Top class knock from him to get 250, is no joke. The way he is batting is tremendous, the positivity, intent he gets is fabulous. His records, scores, and the way he is batting shows everything that we all need to see," Agarwal said.
"With 600 onboard, tomorrow we can come and really attack. The way our bowlers are bowling is tremendous. We are testing them, asking them those tough questions. The runs we had scored gives us time and leverage to keep attacking fields and keep putting pressure on them," he added.
After declaring their first innings at 601/5, Indian bowlers scalped three Proteas wickets.
Dean Elgar and Aiden Markram opened the innings for South Africa but they suffered a shattering start and lost their first wicket at a mere score of 2 runs in the second over.
Elgar was bowled out by pacer Umesh Yadav after scoring six runs. Theunis de Bruyn joined Markram in the middle and built 11 runs partnership before the latter was dismissed by Yadav.
For the third wicket, Bruyn and Temba Bavuma added 20 runs before Bavuma was sent back to the pavilion by Mohammed Shami. At the end of stumps, visitors were at 36/3. Bruyn and Anrich Nortje remained unbeaten on 20 and 2 respectively. The Proteas are 565 runs behind India.
For India, Yadav bagged two wickets while Shami grabbed one.
Earlier, India declared their innings at the score of 601/5 after resuming innings from 273/3 on day two. Kohli and Ajinkya Rahane continued their partnership and built a massive stand of 178 runs for the fourth wicket.
Rahane played a knock of 59 runs before he was sent back to the pavilion by spinner Keshav Maharaj as he was caught behind the stumps by Quinton de Kock.
All-rounder Jadeja joined Kohli in the middle and stitched a giant partnership of 225-run for the fifth wicket. India declared their innings after Jadeja's dismissal by Senuran Muthusamy at the score of 91. (ANI)