India colts off to winning start, defeat Sri Lanka in U19 CWC 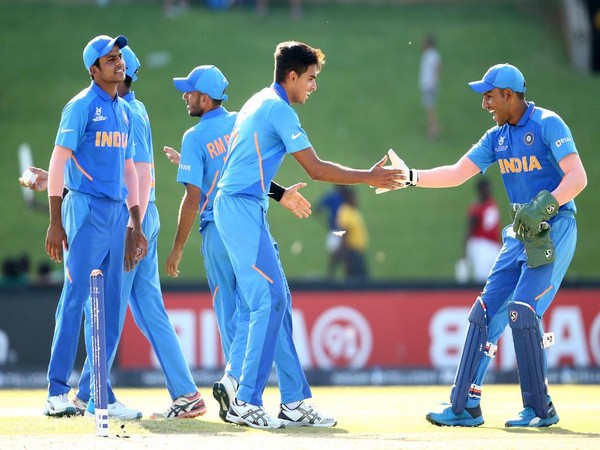 Bloemfontein [South Africa], Jan 19 (ANI): India's colts got off to a winning start in the U-19 Cricket World Cup campaign as the side defeated Sri Lanka by 90 runs on Sunday here at the Mangaung Oval.

Chasing 298, Sri Lanka lost its first wicket in the fourth over as Navod Paranavithana was sent back to the pavilion by Sushant Mishra.
Ravindu Rasantha and Kamil Mishara retrieved the innings for Sri Lanka as the duo put on 87 runs for the second wicket, but as soon as they started gaining an upper hand, India came back as Yashasvi Jaiswal dismissed Rasantha (49), reducing Sri Lanka to 106/2.
Siddhesh Veer then got among the wicket-taking charts and went on to dismiss Mishara (39), pegging Sri Lanka back.
Sri Lanka's batsmen played cameos, but the side struggled in increasing their tempo, and the team had to face a defeat by 90 runs.
Earlier, half-centuries from Jaiswal and Priyam Garg enabled India to post a score of 297/4 in the allotted fifty overs.
Openers Jaiswal and Divyaansh Saxena put on 66 runs for the first wicket. Sri Lanka got the breakthrough in the 12th over as Dilshan Madushanka sent Saxena (23) back to the pavilion. Soon after, Jaiswal (59) also was dismissed and India was reduced to 112/2 in the 22nd over.
Tilak Varma and Priyam Garg then retrieved the innings for the side and took the side's total past the 170-run mark.
Garg scored a half-century while Varma fell just four runs short off the mark. In the end, Dhruv Jurel and Siddhesh Veer's unbeaten stand of 63 runs took India's total past the 295-run mark.
Jurel and Veer remained unbeaten on 52 and 44 respectively.
India will next take on Japan on January 21.
Brief Scores: India 297/4 (Yashasvi Jaiswal 59, Priyam Garg 56, Ashian Daniel 1-39) defeat Sri Lanka 207/10 (Ravindu Rasantha 49, Nipun Dananjaya 47, Siddhesh Veer 2-34) by 90 runs. (ANI)