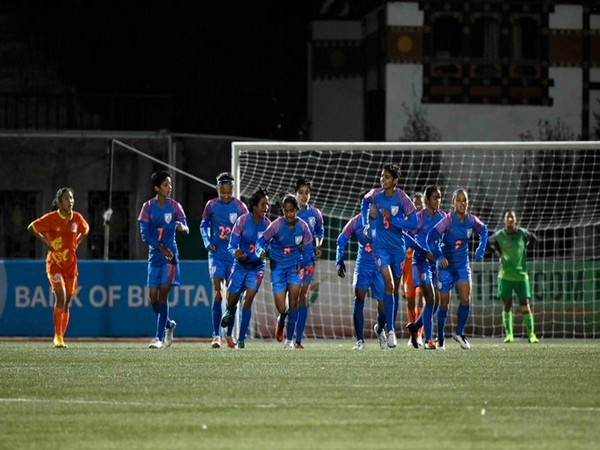 Thimpu [Bhutan], Oct 11 (ANI): India booked their spot in the final of the SAFF U-15 Women's Championship after defeating Bhutan 10-1 at the Chalimithang Stadium here on Friday.

Sai Sankhae scored a second-half hat-trick and Lynda Kom Serto, Sumati Kumari and Kiran scored a brace each, while Priyanka Sujeesh scored one goal to make it 10.
India started off on the front foot as Amisha found some space on the right flank, advanced into the box and squared it to Priyanka Sujeesh, who planted it in the far bottom corner.
Bhutan equalised almost immediately as a goalmouth scrap through Sangay Wangmo, but Kiran restored the lead on the quarter-hour mark as she knuckled a swerving shot into the top corner. Lynda finished off a fine move before Kiran and Sumati added two more as the Indian team headed into the tunnel with a 5-1 lead a half-time.
India came out with the same intensity in the second half as Lynda scored her second goal of the game to make it six. After that, it was the Sai Sankhae show as the substitute netted three goals in nine minutes, to take India's tally to nine before Sumati added the 10th with around five minutes to go.
With this win, India have sealed their spot in the final as they move on to six points. Meanwhile, Bangladesh beat Nepal 2-1 earlier in the day to book their place in the final.
In their next encounter, India are set to play against Bangladesh in the penultimate group-stage match on October 13. (ANI)