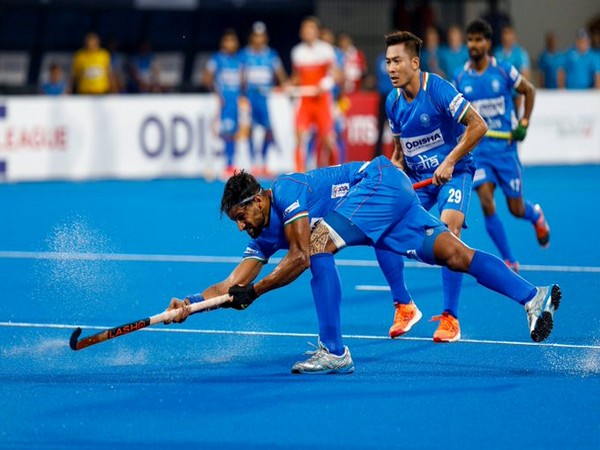 Bhubaneshwar (Odisha) [India], Jan 19 (ANI): India defeated the Netherlands 3-1 in a shootout at the FIH Hockey Pro League at the Kalinga Hockey Stadium here on Sunday.

Rupinder Pal Singh's late goal helped India to play out a 3-3 draw against the Netherlands after which the game went into a shootout. After losing to India 5-2 on Saturday, the Dutch side compensated well and restricted them to a draw.
The first quarter ended goalless as both the teams failed to score a goal. Mink van der Weerden converted a penalty corner in the 24th minute and gave the Netherlands a 1-0 lead. However, soon after India got the equaliser as Lalit Upadhyay registered the goal in the second quarter.
The Dutch were in no mood to slow down and their efforts paid dividends as Jeroen Hertzberger and Bjorn Kellerman scored to give the visitors a 3-1 lead.
In the 51st minute, Mandeep Singh converted a penalty corner and brought the scoreline to 3-2. The final equaliser came from drag-flicker Rupinder's stick who converted a penalty corner. (ANI)