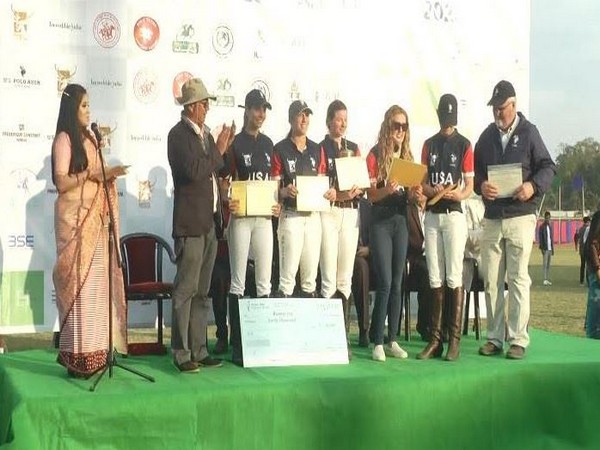 India's only women polo tournament commenced on January 16 and concluded on January 22. It is a part of Manipur Tourism's campaign to save the unique and endangered Manipuri Pony and also to promote Polo Tourism in Manipur, the birthplace of Modern Polo.
The tournament concluded recently at Mapal Kangjeibung which is the oldest living polo ground in the world.
"I am happy that the state government has taken this step...It indeed is a very good step taken to preserve these very rare ponies," Manipur Governor, Najma Heptulla said.
The women polo tournament was organised by the All Manipur Polo Association (AMPA) and was produced by Polo Yatra under the sponsorship of the tourism department of Manipur.
Altogether six teams representing the USA, Great Britain, Argentina, Egypt, IPA (India-A) and Manipur (India-B) participated in this year's edition.
"Polo has spread throughout the world. It has expanded and became very popular in different countries of the world," said Prof K Saratchandra Singh, President, All Manipur Polo Association.
In the final match, the Great Britain women polo team won the coveted title by defeating last year's runners-up USA by 5-2.
In another Polo match- the '15th Women's State Polo Tournament 2020' was also organized by All Manipur Polo Association at Mapal Kangjeibung. The competition was held on a league basis among the four teams, with three matches each.
The two other teams were Thangmeiband Polo Club and Manipur Police Sports Club. Seven junior boys' teams and four women teams participated in the championship.
"Pony is on the brink of extinction. As a player, it is disappointing to know that many Manipuri ponies have died," said Habe, Captain, Lingthoingambi Kangjei Lup.
Lingthoingambi Kangjei Lup and Chingkhei Hunba Polo Club fought for the top title in the showdown of the 15th Women's State Polo Tournament 2020. In the final match, Lingthoingambi Kangjei Lup defeated Chingkhei Hunba Polo Club by 4-3 goals.
Appreciating the tourism department for organising the tournament, Governor Heptulla said polo is the heritage of Manipur and its revival in the state is not only a necessity but also the duty of every Manipuri.
Manipur is not only the birthplace of modern polo, but it is also home to a formidable women's team. While men had been playing polo for ages, the game has now passed on to a woman.
Polo player, Great Britania said, "It was an amazing feeling. The USA was so good in attack and they were really punchy. We came with a good team."
"It was tough and the girls are very talented. We need to be a little more organised in terms of playing our positions," said another Polo player, Pamela, USA. (ANI)