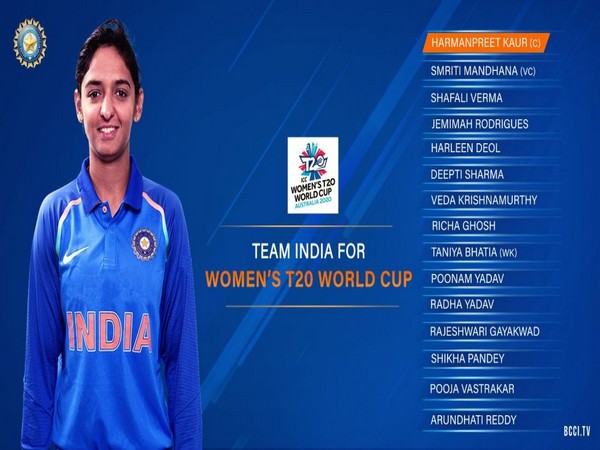 New Delhi: The Board of Control for Cricket in India (BCCI) Women on Sunday announced the 15-member squad for the upcoming ICC Women's T20 World Cup.

Star India all-rounder Harmanpreet Kaur will lead the 15-member India squad at the upcoming ICC Women's T20 World Cup with Bengal's rookie batswoman Richa Ghosh being the only new face in the team. The Women in Blue will kick-off their campaign at the showpiece event against hosts Australia in Sydney on February 21.

Meanwhile, after some back to back consistent show, young batting sensation Shafali Verma will also be a part of the India squad which will also mark her first appearance in an ICC event.

India are placed in Group A along with hosts Australia, New Zealand, Sri Lanka and Bangladesh while Group B comprises England, South Africa, the West Indies, Pakistan and Thailand.

The Hemlata Kala-lead All-India Women's Selection Committee also announced a 16-member squad for a tri-series in Australia prior to the T20 World Cup. Nuzhat Parveen has been included in the squad as the 16th member for the series which will feature England beside India and Australia.

India will take on England in the tri-series opener Manuka Oval in Canberra on January 31 with the final slated to be held on February 12 in Melbourne.

The World Cup will commence from February 21 when the hosts Australia will take on India.