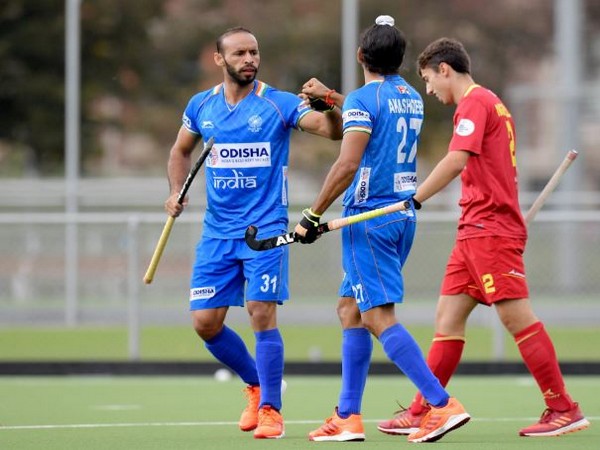 Antwerp [Belgium], Sept 29 (ANI): Indian Men's Hockey Team defeated Spain by 5-1 during their third match of the Tour of Belgium here on Sunday.
Harmanpreet Singh scored twice in the match to help India secure a win over Spain.

Spain got off to a brilliant start in the match as they took a 1-0 lead in the third minute of the game. Iglesias Alvaro scored the opening goal of the match.
However, India did not take much time to score an equaliser as Akashdeep Singh scored a field goal in the fifth minute. In the second quarter, SV Sunil netted a goal to hand India a one-goal lead in the match.
India did not lose momentum as they added another goal to their tally with the help of Ramandeep Singh's stunning strike in the 35th minute.
Harmanpreet Singh then scored his first goal after he converted a Penalty Corner in the 41st minute.
Harmanpreet Singh scored his second goal of the match in the 51st minute after he again successfully managed to convert a Penalty Corner, taking the scoreline to 5-1.
India kept Spain in pressure as they restricted them from scoring any goal and the match concluded on the same.
India will now compete against Belgium on October 1. (ANI)