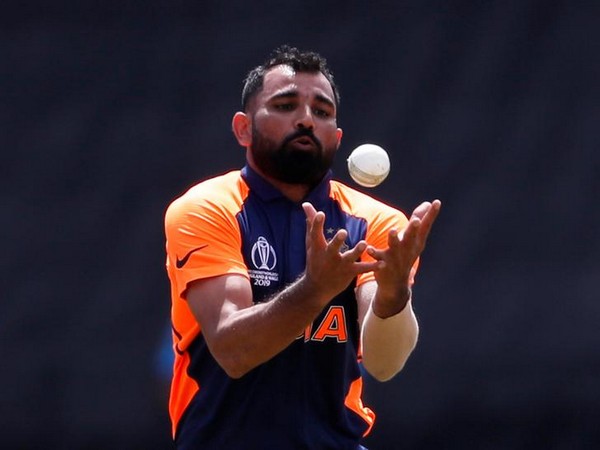 Bengaluru (Karnataka) [India], June 18 (ANI): Pacer Mohammed Shami feels that India's pace attack might just be one of the best of all-time in the history of cricket.

India's fast-bowling attack is being rated very highly in the world as pacers like Shami, Jasprit Bumrah, Ishant Sharma, Umesh Yadav, and Bhuvneshwar Kumar have made the team win on various occasions.
"You and everyone else in the world will agree to this that no team has ever had five fast bowlers together as a package. Not just now, in the history of cricket this might be the best fast-bowling unit in the world," Shami told Deep Dasgupta in a videocast hosted by ESPNCricinfo.
The pacer also said that sometimes all the bowlers surround skipper Virat Kohli to decide as to who gets to bowl with the new ball.
"We surround Virat Kohli and ask him to make the decision. But he normally says, 'don't get me involved in all this; you decide among yourselves, I don't have an issue.' That is the kind of fun we have in our team meetings. I let the other two start. I have no objection to bowling with a semi-new ball," Shami said.
Shami has played in 27 Tests out of India's 30 matches since July 2017. He recorded a second-innings five-wicket haul in Johannesburg in 2018.
He scalped 16 wickets at an average of 26.18 during India's maiden Test series win in Australia in 2018-19.
"My mindset while bowling is that if the batsman is playing well, bowl a tight line and length, dry up the runs, and he will surely make a mistake. Once the set batsman is dismissed, I go for the kill as a bowler," Shami said.
"That's why it seems like I bowl in two different ways. The 'second-innings Shami' label - that has been created by you guys (the media)," he added.
Shami has so far played 49 Tests, 77 ODIs and 11 T20Is for India, managing to take 336 wickets across all formats.
He was last seen in action in India's two-match Test series against New Zealand earlier this year. (ANI)