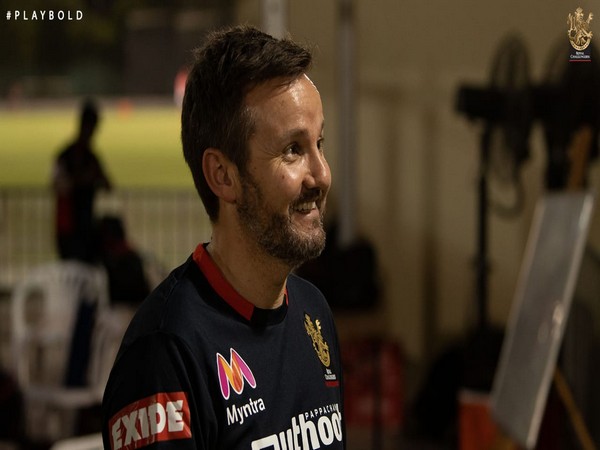 Dubai [UAE], September 8 (ANI): Mike Hesson, Director of Cricket of Royal Challengers Bangalore (RCB), believes that spinners will have a big role in the upcoming edition of the Indian Premier League (IPL) and scores between 150-160 can be match-winning totals.

The IPL 2020 will be played from September 19 to November 10 in the UAE across three venues -- Dubai, Abu Dhabi, and Sharjah.
"On certain grounds, the role of spinners will be really big. In a place like Abu Dhabi, spinners have traditionally played a big role there, it is a bigger ground and spinners come into the equation. But it probably doesn't spin as much as it does in Dubai and Sharjah," Hesson said in a video posted on the official Twitter handle of RCB.
"We have loads and loads of information on every wicket, but we need to have the ability to adjust to the conditions on the given day. Spin will obviously play a part. Over here in the UAE, 150-160 can be a good score," he added.
Hesson also said that the team did discuss the past performances of the side and they tried to address the major gaps in the lineup during the player's auction.
"We have spent a lot of time in reviewing the past seasons, before the auction we addressed the gaps we had in our lineup, we tried to address them with the new signings. I think there is a lot of talk about finishing the innings with the ball in hand, we have got some experienced players who can do the role now," Hesson said
"We also feel that we can improve the players we had earlier. We also need to maximise the playing group, for us to perform as a team, we have to rely on the squad and the players who have not done a massive job for us in the past," he added.
RCB is yet to win the IPL title. The side had managed to reach the finals of 2009, 2011 and 2016 edition, but ended up on the losing side in the summit clash.
Mumbai Indians and Chennai Super Kings will be locking horns in the opening match of the IPL 2020 on September 19 in Abu Dhabi. RCB will take on SunRisers Hyderabad in their opening match of the tournament on September 21. (ANI)