IPL 13: Bravo has suffered right-groin injury, his situation will be reassessed, says Fleming 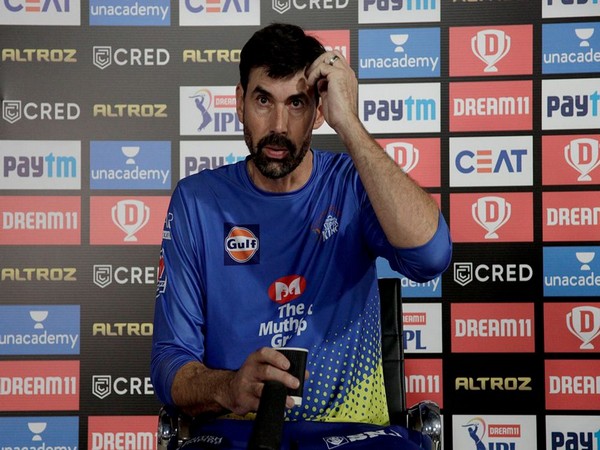 Sharjah [UAE], October 18 (ANI): After suffering a five-wicket defeat at the hands of Delhi Capitals, Chennai Super Kings (CSK) coach Stephen Fleming said that Dwayne Bravo suffered a right groin injury and that is the reason he was not able to bowl the last over during Delhi's innings.

Delhi Capitals (DC) chased down a total of 180 with five wickets in hand and one ball to spare. Shikhar Dhawan scored his maiden century in IPL and he remained unbeaten on 101. With this win, Delhi has now gone to the top of the Indian Premier League (IPL) standings with 14 points from nine games.
Delhi needed 17 runs off the final over, and Axar Patel smashed three sixes in the over bowled by Ravindra Jadeja to hand the Shreyas Iyer-led side a victory.
"Unfortunately Dwayne Bravo got injured so he could not bowl the last over, naturally he is a death bowler, that's the way our season has been going, we are having challenges thrown at us. Jadeja was not planned to bowl at the death, but with Bravo getting injured, we did not have any other option. We did well to create a situation where it could have worked for us but we have to keep working hard and turn it around," Fleming said during the post-match press conference.
"He (Bravo) seems to have a right groin injury, obviously it was serious enough to keep him from coming back to the field, he is just really disappointed that he was not able to bowl the final over, that's pretty much for what he is in the team for. He would have to be reassessed going forward, at this stage, you would imagine that it would take few days or a couple of weeks," he added.
CSK ended up dropping quite a few catches of Dhawan and the left-handed Delhi batsman took full advantage of it. Talking about the fielding of CSK, Fleming said: "Well, we gave Shikhar Dhawan a few lives, he was playing well, we had opportunities to take his wicket early but we did not take them. He was playing aggressively and he was staying right up there with the required run-rate, if we had got him out, we could have put pressure on their middle-lower order, the game might have been different, dropping three-four catches against him was a bit too many."
Batting first, CSK posted a total of 179/4 in the allotted twenty overs. Faf du Plessis (58) and Ambati Rayudu (45*) starred with the bat for the MS Dhoni-led side.
In the end, Ravindra Jadeja also played a cameo of 33 runs off just 13 balls to take CSK's total past the 170-run mark. For Delhi Capitals, Anrich Nortje was the pick of the bowlers as he returned with figures of 2-44 from his four overs.
"It was difficult early on, the way we played in the back five was promising, some good hitting from us to get there at 180, we if had taken our chances, it would have been a match-winning score but it was not to be," Fleming said.
CSK will next take on Rajasthan Royals on Monday, October 19 while DC will lock horns with Kings XI Punjab on Tuesday, October 20. (ANI)