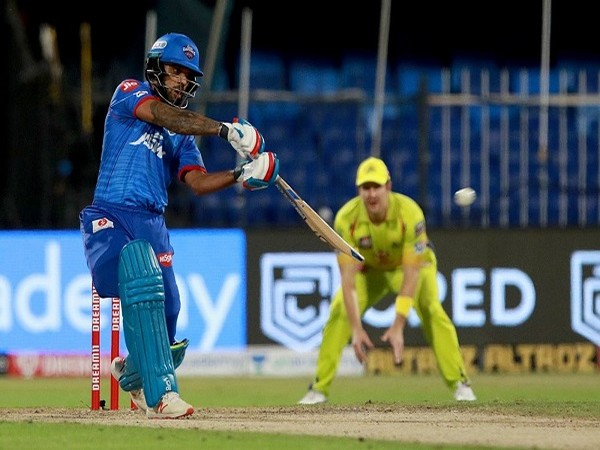 Dhawan smashed 101 runs off 58 balls and recorded his first-ever century in the Indian Premier League to guide Delhi Capitals to the top spot. With this win, the Shreyas Iyer led side has regained the top position in the points table with 14 points.
In the last two overs, Delhi Capitals needed 21 runs but Sam Curran bowled brilliantly and gave away just four runs. However, a final over cameo by Axar which saw him whacking three sixes helped Delhi Capitals chase the target with one ball to spare
Dhawan had also survived a scare on 99 in the penultimate over. The on-field umpire gave him out but he went for a review straight away and the replay confirmed that there was no edge.
Chasing 180 runs, Delhi Capitals got off to a worst possible start as Prithvi Shaw chipped the ball straight back to Deepak Chahar in the very first over.
Ajinkya Rahane then joined Shikhar Dhawan in the middle but their partnership didn't flourish as Sam Curran took an exceptional catch at point and Rahane had to walk back to the pavilion in the fifth over.
Skipper Shreyas Iyer and Dhawan then rebuilt the innings with the latter smashing 40th IPL half-century. Dhawan whacked the ball all around the park for fours.
However, Dwayne Bravo dismissed Delhi Capitals' skipper to put a brake at the peddle in the 12th over. Meanwhile, Dhawan continued his fine form and smashed boundaries at regular intervals.
With 71 needed in the last seven overs, Marcus Stonis and Dhawan accelerated to bring down the ever-mounting required rate. Stonis smashed 24 runs off 14 balls before getting out in the 16th over.
Delhi Capitals required 41 runs in the last four overs and Dhawan started his onslaught and the equation came down to 21 runs off the last two overs with Delhi finally getting over the line.
Earlier after opting to bat first, Ambati Rayudu and Ravindra Jadeja's knocks powered Chennai Super Kings (CSK) to 179/4 in their 20 overs.
Jadeja smashed 33 off 13 while Rayudu scored 45 from 25 balls including four sixes.
Opting to bat first, Sam Curran (0) failed to open his scoring and was sent back to the pavilion in the first over of the innings by Tushar Deshpande.
Shane Watson joined Faf du Plessis in the middle and stitched a solid 87-run partnership for the side. Anrich Nortje scalped the second wicket for his team as he dismissed Watson (36) in the 12th over.
Ambati Rayudu and Du Plessis had a 22-run brief stand for the third wicket before the latter was bagged by Kagiso Rabada in the 15th over. Du Plessis played a knock of 58 runs studded with two sixes and six fours.
CSK skipper MS Dhoni promoted himself up in the order but failed to have an impact on the scoreboard. Dhoni (3) was caught behind the stumps off Nortje.
Ravindra Jadeja and Rayudu accumulated 50 runs for the fifth wicket. CSK finished at 179/4 in 20 overs. For Delhi Capitals, Nortje claimed two wickets while Rabada and Deshpande bagged one wicket each.
Brief scores: Delhi Capitals 185/5 [Shikhar Dhawan 101(58), Marcus Stoinis 24(14), Deepak Chahar 2-18, Dwayne Bravo 1-23] beat CSK 179/4 [Faf du Plessis 58, Ambati Rayudu 45, Anrich Nortje 2-44] (ANI)