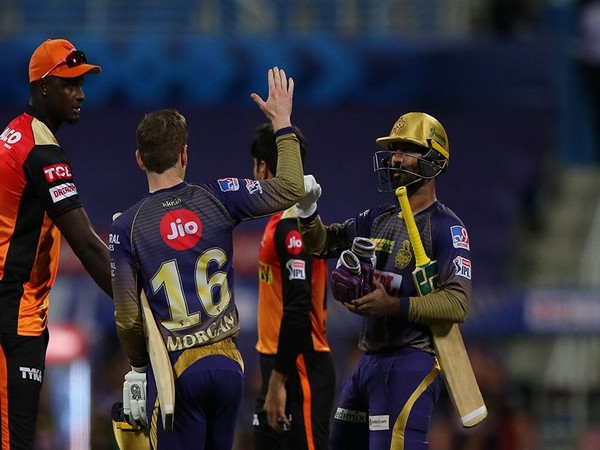 SRH were required 30 runs from the last two overs. Shivam Mavi bowled the penultimate over and conceded 12 runs including the wicket of in-form Samad (23).
Hyderabad needed 18 runs off the last six balls. Struggling Andre Russell bowled the last over of the innings. Warner failed to score two off the last ball and the match went into the Super Over. Hyderabad scored 163/6 in their 20 overs.
Ferguson bowled the Super Over for KKR and bagged two wickets in the first three balls. KKR were required three runs to win off the Super Over.
Eoin Morgan and Dinesh Karthik came in to bat for KKR and put their team over the line easily against spinner Rashid Khan.
Chasing a moderate target of 164, Jonny Bairstow and Kane Williamson provided a solid 58-run stand for the opening wicket. Lockie Ferguson bagged his Kiwi skipper Williamson (29) in the seventh over.
Priyam Garg joined Bairstow in the middle and added 12-run for the second wicket. Ferguson struck again in his second over and this time dismissed youngster Garg (4).
In the next over, spinner Varun Chakravarthy scalped in-form Bairstow after playing a knock of 36 runs. Skipper David Warner and Manish Pandey added 12-run to the scoreboard before the latter was departed in the 12th over.
Pandey just scored six runs. Vijay Shankar came in to bat at number six and joined Warner in the middle. Shankar (7) failed to add big runs under his name and was claimed by Pat Cummins in the 16th over.
Abdul Samad and Warner added a quick partnership of 37-run for the sixth wicket. Samad played a knock of 23 off 15 balls. Warner remained unbeaten on 47*.
For KKR, Lockie Ferguson, playing in his first game of the season, scalped three wickets.
Earlier, KKR skipper Eoin Morgan and Dinesh Karthik played crucial knocks of 34 and 29* respectively, in the end, to help the team set a target of 164 runs.
After being asked to bat first, KKR got off to a good start with openers Shubman Gill and Rahul Tripathi scoring regular boundaries. The duo formed a 48-run partnership before Thangarasu Natarajan, in the sixth over, dismissed Tripathi.
In the 12th over, Rashid Khan removed Gill (36) and in the next over, Nitish Rana was also sent back to the pavilion by Vijay Shankar which reduced KKR to 88/3. Morgan and Andre Russell were the next batsmen and helped KKR get past the 100-run mark.
Both added 17 runs on the board before Russell gave away an easy catch to Shankar off Natarajan's delivery in the 15th over. Karthik then took the field.
Morgan and Karthik played brilliantly and guided KKR to a decent total. Morgan scored 16 runs in the final over before getting out on the final delivery of the innings.
Brief scores: KKR 163/5 (Shubman Gill 36, Eoin Morgan 34, Thangarasu Natarajan 2-40); SRH 163/6 (David Warner 47*, Jonny Bairstow 36, Lockie Ferguson 3-15). Super Over: SRH 2-2 (Abdul Samad 2, Lockie Ferguson 2-2) lost to KKR 3/0 (Eoin Morgan 1*). (ANI)