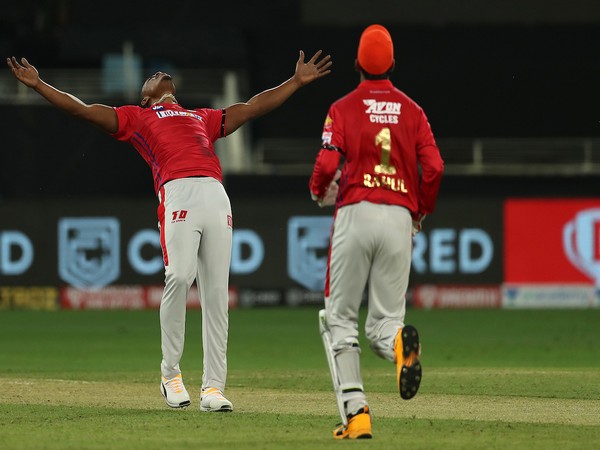 Rahul played an unbeaten knock of 132 runs off just 69 balls and then bowlers bundled out RCB on just 109 runs. Ravi Bishnoi and Murugan Ashwin took three wickets each in the match.
Chasing a massive target of 207 runs, RCB got off to a poor start as they gave away three wickets in quick succession. Sheldon Cottrell dismissed Devdutt Padikkal and Virat Kohli in the first and third over of the innings respectively while Mohammed Shami dismissed Josh Philippe in the second over.
The fall of wickets did not stop as Aaron Finch too was sent back to the pavilion in the eighth over. Bishnoi bowled Finch, who scored 20 runs. In the next over, Ashwin got hold of AB de Villiers, reducing RCB to 57/5.
Shivam Dube and Washington Sundar then took the field but KXIP continued to dominate the game. Both formed a 26-run partnership before Glenn Maxwell bowled Dube (12).
Continuing their dominance in the match, RCB lost another wicket as Bishnoi bowled Umesh Yadav. In his next over, Bishnoi got hold of Sundar, who was the highest run-getter from RCB, scoring 30 runs.
Dale Steyn and Navdeep Saini were the next batsmen but their partnership also did not last long as the latter was bowled by Ashwin in the 17th over. As a result, KXIP were just one wicket away from the win.
Rahul-led team did not take much time to claim the victory as Ashwin dismissed Yuzvendra Chahal in the same over, taking Punjab over the line.
Earlier, after being asked to bat first, KXIP managed to post a total of 206 with the help of Rahul's magnificent ton. With this knock, he also achieved the highest individual score by an Indian player in the IPL.
KXIP had a decent opening stand of 57-run for the first wicket between Rahul and Mayank Agarwal. Meanwhile, Rahul, who was two short of 2,000 runs in the IPL, became the fastest Indian to reach the 2,000 run-mark in the tournament.
Rahul broke an eight-year-old record held by Indian batting legend and former Mumbai Indians player Sachin Tendulkar, who reached the milestone in 63 innings. Rahul reached the milestone in his 60th IPL innings.
Spinner Yuzvendra Chahal broke the opening partnership in the seventh over as he scalped Agarwal on 26. Nicholas Pooran joined Rahul in the middle. The duo had a 57-run partnership for the second wicket.
All-rounder Shivam Dube dismissed Pooran (17) in the 14th over as he was caught at mid-off by AB de Villiers.
Glenn Maxwell (5) failed to score big runs and was caught at extra cover by Aaron Finch off Dube in the 16th over.
Karun Nair joined Rahul in the middle and built a 78-run stand for the fourth wicket. The duo scored 49-run in the last two overs. Nair remained not out on 15 runs off eight balls. Also, Rahul got lucky twice as he was dropped by Virat Kohli two times in the match. (ANI)