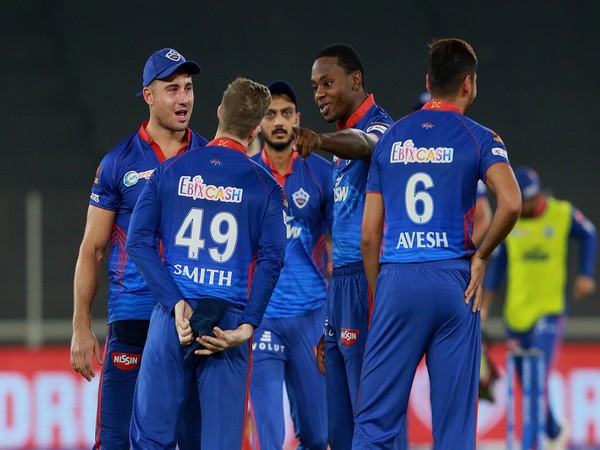 Ahmedabad (Gujarat) [India], May 3 (ANI): Delhi Capitals pacer Kagiso Rabada has said that the atmosphere inside the team's dressing room is great and every member knows that there are no easy games in the Indian Premier League (IPL).

Shikhar Dhawan played a knock of 69 runs as Delhi Capitals defeated Punjab Kings by seven wickets here at the Narendra Modi Stadium on Sunday. Along with Dhawan, Prithvi Shaw also played a quickfire knock of 39 runs. For Punjab Kings, Chris Jordon, Harpreet Brar, and Riley Meredith returned with one wicket each.
"The atmosphere is great the moment, it is a young team and we have come of some good performances. There are no easy games in the IPL, even against you guys, it was not an easy game," Rabada told Punjab Kings' stand-in skipper Mayank Agarwal in a video posted on the website of IPL.
"It was great to get that wicket of Gayle, two wickets in the powerplay makes it tough for the batting team. You batted really well, dropped at deep-point, and it turned out to be your day. You whacked me for two sixes," he added.
With this win, Delhi Capitals has moved to the first spot in the points table with 12 points from 8 games while Punjab Kings remain in sixth place with six points.
Earlier, Mayank Agarwal played an unbeaten knock of 99 runs as Punjab Kings posted a score of 166/6 in the allotted twenty overs. Along with Agarwal, Dawid Malan also chipped in with a knock of 26 runs. For Delhi Capitals, Kagiso Rabada returned with three wickets.
"It felt nice, it was a little tough initially, with the way you guys bowled in the powerplay, it was not easy. You guys bowled great lengths and nothing was easy for us. With that said, getting Univere Boss early was a little harsh on us. I will be wary of the next time we face you. We are upbeat about things, there are a lot of good things that we are doing and we are keeping a positive mindset," Agarwal told Rabada. (ANI)