IPL 2021: Morris and I were trying to keep it simple and calm in the middle, says Jaydev 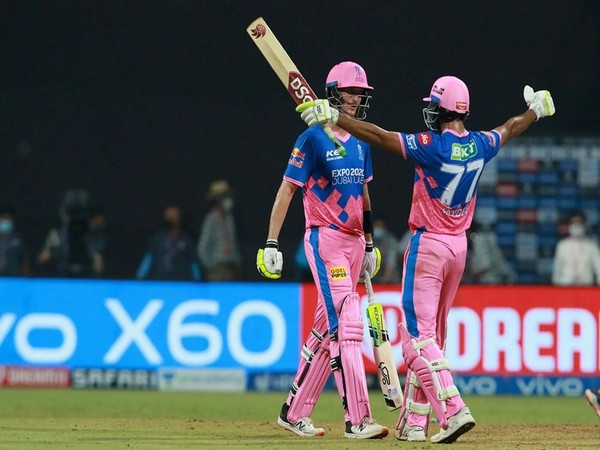 Mumbai (Maharashtra) [India], April 16 (ANI): After a thrilling three-wicket win over Delhi Capitals at the Wankhede Stadium on Thursday, Rajasthan Royals pacer Jaydev Unadkat said while batting in the last few overs he and all-rounder Chris Morris kept things simple and stayed calm in the middle.

Back against the ball, left-handed batsman David Miller produced a 62-run knock and it was followed by Morris' cameo of 36 runs off just 18 balls while Unadkat also scored unbeaten 11 off seven balls.
Miller played a knock of 62 runs. The left-handed batter came out to bat at the score of 17/3, and he guided Rajasthan's innings. And with 27 needed off the final two overs, Morris stepped up to the occasion to take his side over the line with two balls to spare.
"We were trying to keep it simple and calm out in the middle. When you are in a pressure situation, at times, you lose your mind and start thinking ahead of the ball. We were both talking to each other, telling each other to watch the ball nicely and just go for it. He (Morris) couldn't middle the first few balls. I kept telling him, it is just about one hit," Unadkat said in the virtual post-match press conference.
The pacer returned with the figures of 3-15 in his four overs spell that restricted Capitals under 150 in their allotted 20 overs.
While replying to an ANI query, he said, "The ball was coming on to the bat nicely. The way he (Morris) was swinging it, we were confident that we were a couple of hits away. That's what we were talking about in the middle, that we are just two hits away from getting the game in our pockets. It was amazing hitting by Morris. The sixes that he hit of Kagiso (Rabada) were probably some of the best shots today".
When asked about youngster Chetan Sakariya's performance, Unadkat said, "Very very happy, he has come a long way from bowling for Saurashtra making his debut 3-4 years back. I have seen him grow as a cricketer. He is someone who puts his body on the line and gives more than 100 per cent every time on the field. You need such players in your team who can contribute in more than one way. He is someone who actually feels the game and I'm very happy with the way he started his IPL career."
On taking in-form Prithvi Shaw's (2) wicket early, the pacer said a lot of discussions were held in the bowler meetings on what will be the right field placement against him.
"Field placements are something which we talk about a lot in our bowler meetings as well. We had a couple of plans in place for Prithvi (Shaw). He played really well last game, and he tries to hit it down the ground a lot. And if we have protection down there, the batsman will obviously try and do something new, be it Prithvi or anyone else. If the ball is doing something, then you will go out of your way and try to play a shot. That is what Prithvi eventually did. Lucky to get his wicket in that over itself," he said.
"It is always about that one game. It has been about 8-10 years since I have been playing the IPL. I knew that when my opportunity will come, I'll have to be right up there in terms of performance. Happy to have contributed today. We needed this win as a team after losing the first game close up. It is always good to come out on the winning side in such close games. It gives a lot of confidence to the team. It gives you that much-required momentum in this format. I was able to execute what I wanted to do," he added.