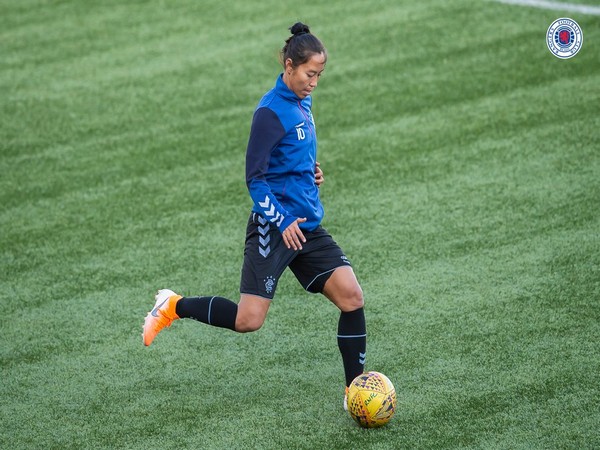 "The level, of course, is much higher than India and its a year-long league so its very good to be playing in this environment. The movement off the ball, passing speed and physical play is at a much higher level but I am adjusting," Bala Devi told ANI.
"The girls have been really supportive. Most of them are from other countries so it's a very welcoming and warm environment," she added.
Forward Bala Devi captured the imagination of all after getting signed by Scotland's Rangers FC.
The forward managed to get an 18-month deal with the club, making her the first Indian woman footballer to sign a professional contract.
With this she also became the first Asian international to join Rangers FC.
When asked how she has adjusted with the club, the forward replied: "I live with players from Canada, Venezuela, France, Northern Ireland so it is no problem for me to adjust to the food as we all have different types of food but we enjoy keeping a healthy footballing diet as far as possible".
"The club is very supportive and training is almost every day (just like the men's team) and the coach and staff always help out with the language, support to get nutrition, gym schedules so we are pretty much set," she added.
Bala Devi also revealed that she was taken aback after witnessing the facilities that have been provided to the women's team in Scotland.
The forward also revealed how her deal got finalised with Rangers FC.
"I was contacted by my current representative that Rangers Women's Football Club were looking to recruit some high-quality players and thereafter the club I think liked my profile so they invited me to come over for a trial in November. With the trial going well, all the coaches and staff at Rangers had positive things to say and post that the contract was offered to me," Bala Devi said.
Rangers FC also has a partnership with Bengaluru FC that was announced in September 2019.
Upon her signing with the club, Indian men's football skipper Sunil Chhetri also congratulated Bala Devi, saying she has gone somewhere where no Indian woman did in the past. (ANI)