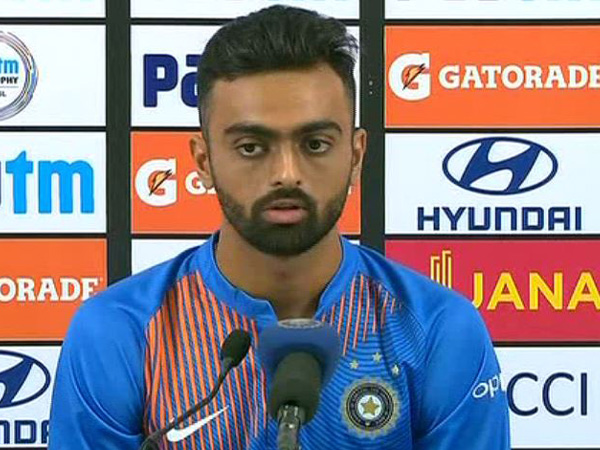 Dubai [UAE], September 16 (ANI): Rajasthan Royals spearhead Jaydev Unadkat has admitted that life inside a bio-secure bubble isn't "easy" and the upcoming edition of the Indian Premier League (IPL) is going to be different.

Rajasthan Royals were the first franchise to reach the UAE on August 21. Upon reaching UAE, all the players were quarantined for six days, and after getting three negative tests for COVID-19, they started training for the IPL.
"IPL will be different this season. There won't be any crowd in the stadium. We have to remain inside the bubble. But to get to play cricket in this time is itself a boon and I am really looking forward to the tournament," Unadkar told ANI.
"Life in a bubble is not really easy, to be honest, but we are getting to play cricket and that's one thing which we all love, so no complaints. We have a lot of protocols to follow. We are getting used to it," he added.
On March 13, Unadkat-led Saurashtra clinched its maiden Ranji Trophy title after defeating Bengal at the Saurashtra Cricket Association Stadium.
The 28-year-old bowler bagged two wickets in the final. Unadkat was also the key cog in the bowling wheel of Saurashtra during the season. The bowler believes he can carry on his form to IPL.
"I think I had a fantastic domestic season not just personally but as a team as well. We won the Ranji trophy and that gave me a lot of confidence. I keep saying that the last ball that I bowled won as the trophy," Unadkat told ANI.
"Royals have always tried to maintain the balance between youth and experience and is looking the same this year as well. Let's hope we strike the right momentum at the right time," he added.
The IPL 2020 will be played in the UAE from September 19-November 10 and the tournament will run for 53 days.
Rajasthan will face Chennai Super Kings in their opening game on September 22. (ANI)