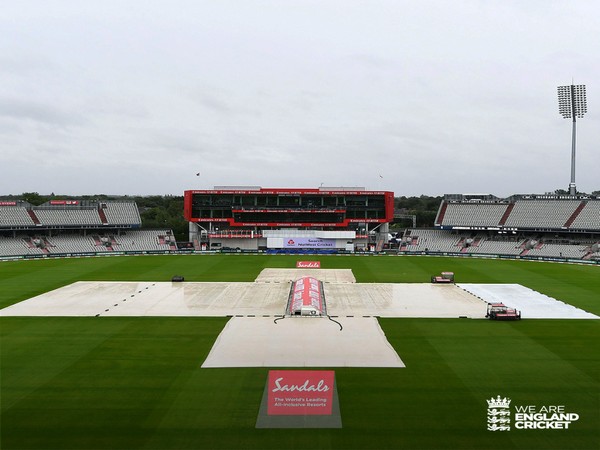 Manchester [UK], July 27 (ANI): The fourth day of the third Test match between England and West Indies have been abandoned by the rain here at Old Trafford on Monday.

England will now be required eight wickets to seal the series while the visitors need 389 runs on the final day of the Test.
The winner will claim the three-match Test series, which currently stands at 1-1.
The Caribbean side got off to a poor start in their second innings as Stuart Broad dismissed John Campbell for a duck. In the next over, Broad dismissed Kemar Roach (4).
Kraigg Brathwaite and Shai Hope will resume West Indies' second innings from 10/2 on day five.
Earlier, resuming the first innings from 137/6, Jason Holder and Shane Dowrich provided West Indies with a decent start on day three. Both players played cautiously but kept the scoreboard ticking.
When Holder was just four runs away from completing his half-century, he was given LBW off Stuart Broad's delivery. Rahkeem Cornwall then came out to bat but only managed to score 10 runs before Broad dismissed him. In the same over, Broad got hold of Kemar Roach too, reducing West Indies to 188/9.
Continuing his brilliant form with the ball, Broad then took the wicket of Dowrich (37) to end West Indies' first innings. Broad clinched six wickets which helped England gain a massive 172-run lead over West Indies.
Dom Sibley and Rory Burns began England's second innings and batted brilliantly. The duo kept smashing boundaries and took the team over the 100-run mark, with both scoring their respective half-centuries.
Holder gave West Indies the much-needed breakthrough as he dismissed Sibley, who was given LBW after scoring 56 runs.Joe Root then joined Burns out on the field.
Both of them scored at a quick pace. Root also went on to score his half-century, reaching the mark in just 49 balls.
Roston Chase got hold of Burns, who played a knock of 90 runs. Soon after Burns' dismissal, England declared their second innings at 226/2, setting a target of 399 runs for the West Indies. (ANI)