Manchester Test: West Indies on back foot as top order fails to deliver on day two 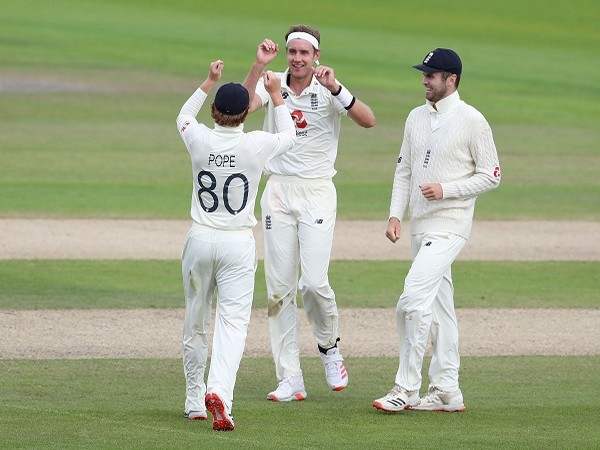 Manchester [UK], July 25 (ANI): England continued their dominance in the third and final Test as West Indies lost six wickets in the first innings with just 137 runs on board on day two at the Emirates Old Trafford Stadium here on Saturday.

The Jason Holder-led side still needs 33 runs more to avoid a follow on.
Resuming from 258/4 on day two, England witnessed the worst possible start as the side lost Ollie Pope without an addition to his overnight score.
In the very next over, Kemar Roach clean bowled Chris Woakes to become the first Windies bowler to take 200 wickets since Curtly Ambrose in 1994 in Test cricket.
Two overs later, Roach again wreaked havoc and claimed his fourth wicket of the innings as Jofra Archer edged the ball to West Indies skipper Jason Holder in the slips.
Stuart Broad added valuable late runs and smashed the joint third-fastest half-century for England and took his team to a respectable total. England were folded for 369 runs in the first innings.
Broad continued his excellent performance with the bowl too and provided England with a breakthrough in his first over dismissing Kraigg Brathwaite for just one run.
John Campbell and Shai Hope then stitched a brief 43 run stand before an excellent bouncer by Jofra Archer sent Campbell on his way for 32 runs.
Campbell's wicket triggered a top-order collapse as West Indies lost four quick wickets before the end of the day's play due to Bad light.
For England, James Anderson and Broad took two wickets while Jofra Archer and Chris Woakes bagged a wicket each. (ANI)