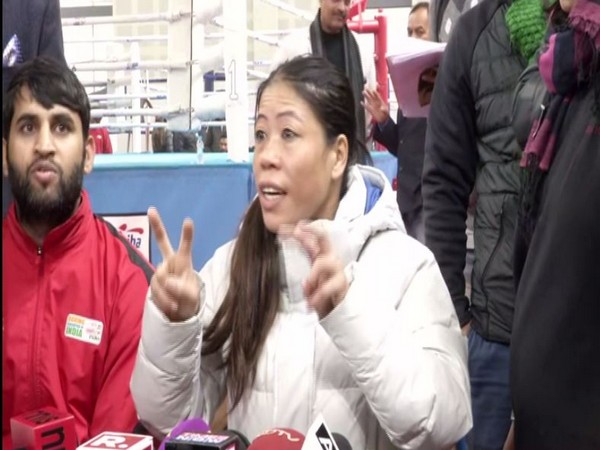 New Delhi: Mary Kom beat Nikhat Zareen in the 51kg final of the women's trials for the Indian team that will travel to China in February for the Asia/Oceania Olympic qualifiers. In keeping with the build up to the bout which involved both camps exchanging words in public over several months, it was followed by dramatic scenes at the Indira Gandhi Indoor Stadium complex in New Delhi with officials of the Telangana Boxing Council stating that they will lodge an official protest with the International Boxing Association (AIBA).

The match looked a far closer affair than the 9-1 result suggested. Both pugilists locked on each other a number of times and were for the most part unable to land clear punches. Supporters from both sides were vehemently cheering their boxers and when the result was announced, Telangana officials present at the venue angrily protested it.

Saturday's match was a culmination of months of build-up which started with Nikhat not being given a chance to stake a claim in the Indian contingent that went to the Women's Boxing World championships earlier in the year.

Nikhat had after the Women's Boxing World Championships in November demanded a trial to decide who between her and Mary Kom will go to China after it looked like the latter may travel for the Asia/Oceania Olympic qualifiers in February. This after the Boxing Federation of India's remained undecided over the selection policy. She had also demanded that the trials be telecast live which the BFI rejected stating that there is no precedence for it.

While Mary always stated that she would abide by whatever selection policy the BFI has, she had indicated an aversion to a trial, taking the example of other sports in which athletes don't have to give trials. "Even in other games like badminton, who gives trial? Have you seen Saina Nehwal and P.V. Sindhu appearing for trials? But in our case it is different," she had said in August.

"Why should I shake hands with her? If she wants others to respect her then she should first respect others. I don't like people with such nature. Just prove your point inside the ring, not outside," the six-time world champion told reporters after the bout.

Earlier this year, Zareen had demanded a 'fair chance' to contest the Tokyo Olympic qualifiers. On October 17, Zareen had written to the Sports Ministry challenging the Boxing Federation of India's (BFI) decision to accommodate world champion Kom by changing its rule of exempting gold and silver medallists from the World Cup.

"I am only focussing on the upcoming big competition. Anyone can make plans, strategies, it is about going out in the ring and expressing yourself," Kom said.

"All the boxers were told that whoever achieved gold medals in the international competition, they would not be required to go through a trial. Even I was shocked when I got to know that bronze medallists won't be required to go through trials. But later, this rule was changed, I took part in the trial and I have now proved myself," she added.
Kom had won a bronze in the 51kg semi-final at the Women's World Boxing Championships in Ulan-Ude in Russia earlier this year.

I felt hurt: Nikhat Zareen on Mary Kom not shaking hands after bout

Nikhat Zareen, after losing an Olympic Qualifiers trials final bout against Mary Kom, said that she 'felt hurt' after the latter refused to shake hands with her as she did not expect such behaviour from seniors.

"I did not like how she behaved with me. When the decision was announced and I tried to hug her but she did not hug me back. Being a junior I expect seniors to respect us too. I felt hurt but that's okay I don't mind," Zareen told reporters here.

Kom defeated Zareen 9-1 in the 51kg category final bout. Talking about the clash Zareen said she is happy with her performance and termed the match 'close'.

"I think I have given my best. I'm happy with my performance though I did not win, I won the hearts. The bout was close and it could have gone either way," the boxer said.

When asked about how was six-time world champion Kom's behaviour in the ring she said, "In the ring, she used some bad words for me and I don't want to react on that right now."

"Recently BFI president has announced that if Kom does not qualify for 51Kg category than there will be another trial. If it gonna happen then I will be preparing and looking forward to that," she added.

Zareen will next be preparing for the competitions in Serbia and Turkey and she believes that her name will be announced for the latter event.