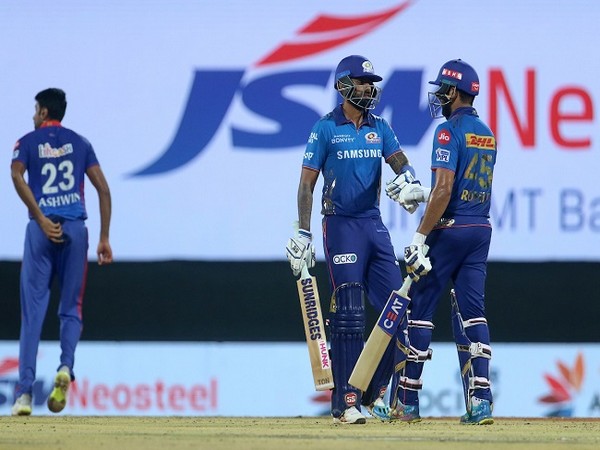 Chennai (Tamil Nadu) [India], April 21 (ANI): Mumbai Indians skipper Rohit Sharma admitted that his side couldn't capitalise on the start given by him and Suryakumar Yadav in their Indian Premier League match against Delhi Capitals which they lost by six wickets on Tuesday evening.

Mumbai Indians were cruising towards a mammoth total having scored 55/1 in the first six over but leg-spinner Amit Mishra wreaked havoc and dismantled the batting order removing Rohit, Kieron Pollard, Hardik Pandya, and Ishan Kishan in quick succession as the defending champions managed to post a paltry score of 137/9 in their allotted 20 overs and Delhi chased down the target with five balls to spare here at the MA Chidambaram Stadium.
"After the start we got, I thought we could have batted well in the middle overs, which we didn't do. We didn't capitalise on the start in the powerplay, which we failed to do again," Rohit told host broadcaster Star Sports.
"Credit to Delhi bowlers - they kept the pressure up and kept taking wickets. We knew dew was going to come in.
"We saw in the last few games that it's not that difficult to grip the ball. Dew is not really the factor. You need to play smart cricket to win," he added.
The Mumbai Indians skipper also confirmed that he suffered a "small niggle" during the course of the match. But he expects himself to be fully fit before the next match against Punjab Kings slated to be played at the same venue on Friday. (ANI)