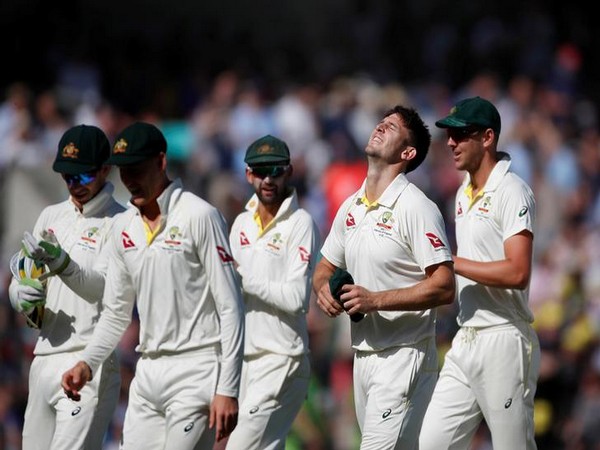 England resumed their batting from a score of 271/8 on the second day of the Test and only added 23 runs to their innings.
Overnight batsman Jos Buttler was bowled out by pacer Pat Cummins after he added 70 runs to the scoreboard. Jack Leach also departed early as he was scalped by Marsh in the next over. Leach played a knock of 21 runs.
For Australia, Marsh picked five wickets while Pat Cummins scalped three and Josh Hazlewood bagged two wickets.
Earlier on Thursday, after being put in to bat, the Three Lions lost their first wicket with just 27 runs on the board. Pat Cummins had Joe Denly (14) caught at the second slip.
Next, skipper Joe Root came into bat and he along with Rory Burns, steadied the innings for England. Root was given two lives before the lunch break. Both times, the unlucky bowler was Cummins as two catches were dropped off his bowling. The first catch was dropped by Peter Siddle whereas the second one was put down by skipper Tim Paine.
England went into the lunch break at the score of 86/1. Root was given a third reprieve as Smith dropped a catch off Siddle's bowling. However, the team from Down Under quickly got the breakthrough of Burns (47) as he was dismissed by Josh Hazelwood.
All-rounder Ben Stokes (20) was not able to stay at the crease for a long time, as he was sent back by Mitchell Marsh reducing England to 130/3.
The Three Lions did not lose any more wicket before the tea break and they went into the interval with the score of 169/3.
After the tea break, Cummins rattled the stumps of Root (57) to leave England in a spot of bother. After the skipper's dismissal, Aussies got four more wickets quickly as Jonny Bairstow (22), Sam Curran (15), Chris Woakes (2) and Jofra Archer (9) all failed to leave a mark.
Wicket-keeper batsman Buttler then started to play in an aggressive manner and he allowed England to go past the 250-run mark.
He found support in Leach and both batsmen ensured no more wickets fall on the first day of the match. (ANI)