Motera not only largest, but one of the best stadiums in world: Rijiju 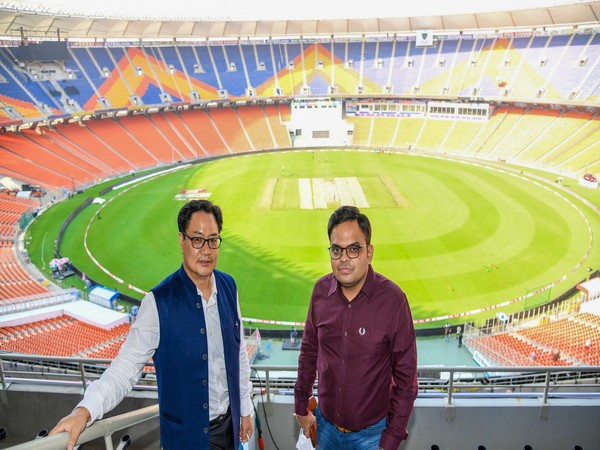 Ahmedabad (Gujarat) [India], February 24 (ANI): Kiren Rijiju, the Union Minister for Youth Affairs and Sports said that the newly-built Motera Stadium is not just the largest, but it is also one of the best stadiums in the world.

Motera Stadium will be hosting the day-night Test between India and England which is set to begin from today. Before the first ball is bowled, the stadium would be inaugurated by President Ram Nath Kovind.
A day before the Test match, Rijiju along with BCCI secretary Jay Shah visited the stadium to take note of the world-class facilities.
"I went to see the Motera Stadium, I tried to understand everything virtually, be it the size, design, or structure. I can say that the Motera Stadium which is the largest in the world, is not just the biggest, but is one of the best stadiums in the world. The facilities for the spectators and players are top-notch. This is not only the largest but it is one of the best stadiums in the world. I am very proud that our country has such a stadium. I thank Prime Minister Narendra Modi for conceptualising this stadium and then I thank Home Minister Amit Shah for ensuring that the stadium is constructed within 2.5 years," said Rijiju while talking to select media in Ahmedabad.
"No stadium or facility can be successful without a revenue plan. I have listened briefly to the revenue plan for the Motera Stadium. BCCI secretary Jay Shah briefed me about this, I realised that he has a viable model ready with him for commercial success, without a revenue model, no stadium can be successful," he added.
The Motera is now the world's largest cricket stadium with a capacity of 1,32,000 spectators. While most cricket grounds are built round in shape, the Motera Stadium in Ahmedabad is oval. And the reason behind that is to ensure that the size of the boundary remains the same irrespective of the pitch on which a match is being played. There are a total of 11 pitches on the ground -- six are of red soil and five of black soil.
Speaking to ANI, a Gujarat Cricket Association (GCA) official had explained how the oval shape of the Sardar Patel Gujarat Stadium makes it unique.
"This is an oval-shaped ground. Traditionally on other grounds, when you play a match on pitch 1, one boundary fence is longer and the other shorter, but this is not the case here. It has all been done keeping the pitches in mind.
"Sydney or Melbourne has round-shaped grounds. When the pitch is shifted at these grounds, then boundary rope on one side is affected, but this is not the case here," the GCA official explained.
The official also explained how crowds would be able to enjoy the match, irrespective of their ticket price. Every fan would be able to have the best view possible and it is not the case that the expensive ticket holders would enjoy an advantage in terms of the view of the match.
Crowd evacuation is a little bit difficult when the match ends and there is chaos on show, but Motera has also sorted this out as a big ramp has been created and the entire crowd capacity can leave the stadium within 30 minutes. (ANI)