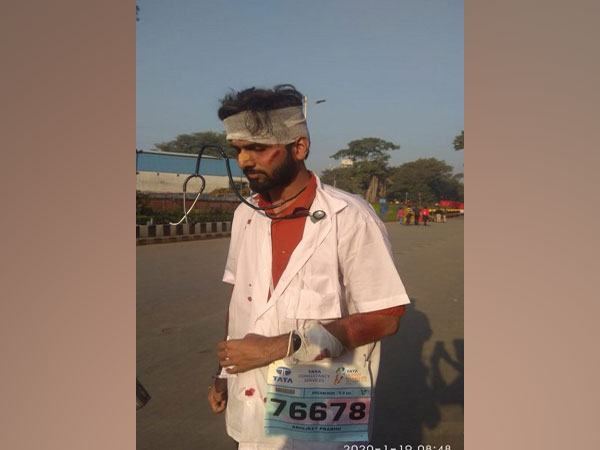 Mumbai (Maharashtra) [India], Jan 19 (ANI): Raising the issue of violence against doctors, a participant in the 17th edition of the Tata Mumbai Marathon came dressed up as a beaten-up doctor, demanding protection from attack by patients and their families.

The participant, named Abhijeet Prabhu, said doctors are just human beings and they try their level best to save each life.
"At the end of the day, I am a doctor, a human just like you and not god. I have taken a pledge to save lives, not to take lives. Last time, I participated in the marathon as a cancer patient and before that, I took part as a blood donor. I focus on a thing which is the need of the day," he told ANI.
On June 11 last year, a junior doctor was attacked by the family of a patient who died in Kolkata. After the incident, junior doctors at NRS Medical College and Hospital demanded assurance of safety.
The doctors of All India Institute of Medical Sciences (AIIMS) demanded a tough central law against anyone who engages in violence with medical practitioners.
During the marathon, other participants also took the opportunity to spread awareness regarding various social issues like acid attacks on girls and increasing pollution. (ANI)