New Zealand defeat Windies in quarterfinals in U-19 World Cup 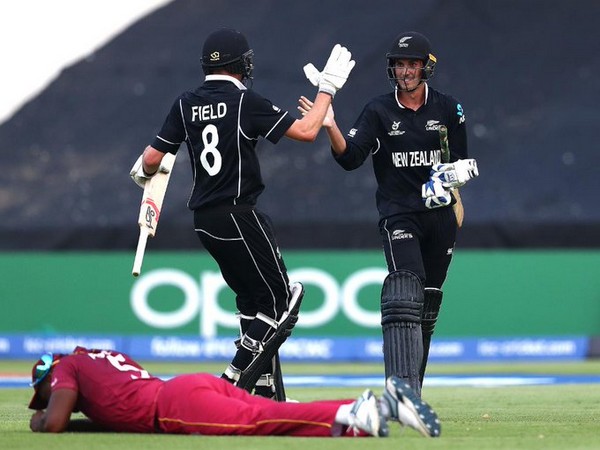 Benoni [South Africa], Jan 29 (ANI): In a thrilling encounter New Zealand defeated West Indies by two wickets and booked the spot in the semifinals of the International Cricket Council (ICC) U-19 World Cup here on Wednesday.

Chasing 239, New Zealand did not start well and lost Ollie White (0) in the third over. However, Rhys Mariu and Fergus Lellman put on a 48 runs stand for the second wicket.
Mariu got out after playing a knock of 26 in the 13th over. Lellman (29) too went to pavilion, reducing the side to 66-3. In the next over, Nyeem Young dismissed Jesse Tashkoff (6).
Quinn Sunde and Simon Keene took the side past 100 run mark. Sunde (32) got out in 25th over, breaking the 51 runs stand. Beckham Wheeler Greenall joined keene at the crease and took the team past 140 runs mark.
Keene made 33 runs while Greenall played a knock of 16 runs. Adithya Ashok (0) was dismissed by Ashmead Nedd.
Joey Field and Kristian Clark's lower order innings of 38* and 46*, propelled the side to a two-wicket victory over Carribean team.
Earlier after opting to bat first, West Indies had a bad start and lost both openers cheaply. However in the middle over, Kevlon Anderson and Kirk Mckenzie saved the side from trouble.
Mckenzie played a knock of 99 runs while Anderson made 33 runs. Lower down the order, Windies lost a flurry of wickets and were bundled out on 238 in 48th over. (ANI)