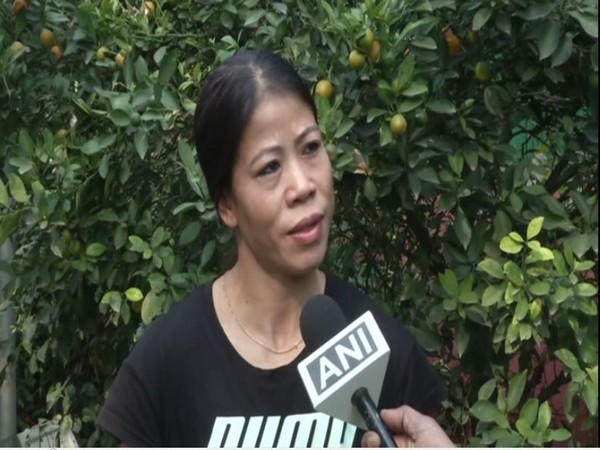 New Delhi [India], Jan 26 (ANI): Elated on being shortlisted for the Padma Vibhusan award, boxer Mary Kom on Sunday said that there will no weak opponent in her weight category in the upcoming Olympics.

She also said that it will all depend on how the climate is in Jordon for the Olympic qualifiers.
"The first task is to qualify for the Olympics. The qualifiers will be in Jordon, we are trying our best. I have experience of playing at the big stage, I am always training to maintain my fitness," Mary Kom told ANI.
"Every opponent is tough, there is no weak opponent. It will all depend on how the climate is in Jordon for the qualifiers. It will be about adjusting to the conditions," she added.
On Saturday, it was announced that Mary Kom will be conferred with the Padma Vibhushan while shuttler PV Sindhu will be getting the Padma Bhushan.
Cricketer Zaheer Khan, woman footballer Oinam Bembem Devi, hockey player MP Ganesh and Rani Rampal, shooter Jitu Rai and archer Tarundeep Rai will be conferred with the Padma Shri honour.
Last year, Mary Kom, currently a member of the Rajya Sabha, had won the bronze medal in the Women's World Boxing Championships while Sindhu forged her name in history by becoming the first Indian to win a gold at the BWF World Championships.
The six-time world champion Mary Kom thanked Sports Minister Kiren Rijiju for nominating her for the accolade.
"I am very happy, it is a big honour. It is hard for me to express my happiness, I would like to thank the Sports Minister, Kiren Rijiju for recommending my name. I would also like to congratulate all others who will be receiving the award," Mary Kom said.
"I would like to congratulate PV Sindhu and Rani Rampal. They have been working hard for a long time, the award will help them to perform better and better," she added.
The boxer also revealed that the BFI president Ajay Singh has been in constant touch with all boxers to get them ready for the upcoming boxing trials in Jordon.
"I am trying to do my best for the country. The BFI has also supported me, the president of BFI has been interacting with us to make sure we prepare well for the upcoming Olympics. Everyone is getting the exposure, and all boxers are highly motivated. My preparation is going well, I am trying my best to leave no stone unturned," Mary Kom said. (ANI)