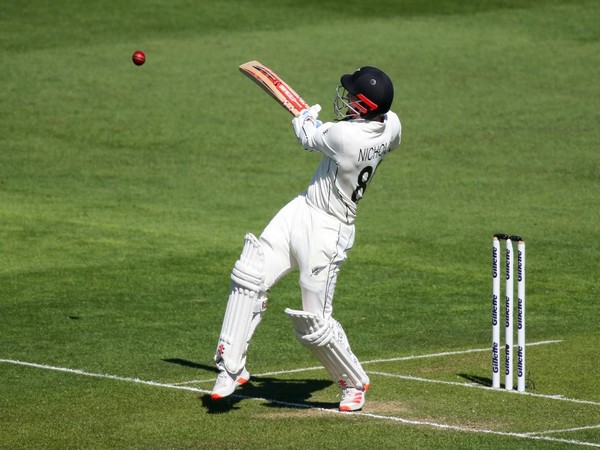 Wellington [New Zealand], December 11 (ANI): Henry Nicholls' unbeaten knock of 117 guided New Zealand to 294/6 at the end of the first day's action in the second Test against West Indies here at Basin Reserve on Friday.

Registering a much-deserved fifth Test century, the middle-order bat will look to continue from where he left on the opening day as he will have Kyle Jamieson (unbeaten on 1) for company on the second morning.
The visitors won the toss and elected to bowl first against the Kiwis. Chemar Holder and Shannon Gabriel proved that Jason Holder's call was right as they sent the top-order back to the pavilion by the 43rd over.
But Nicholls decided to sweat it out in the middle and found support from BJ Watling (30) and Daryl Mitchell (42) as they ensured that the Kiwis stayed in the game.
Earlier, openers Tom Blundell and and Tom Latham failed to put a high-scoring partnership as the former departed after scoring just 14 runs. Young joined Latham and stitched a 32-run stand for the second wicket. Latham played a knock of 27 before being caught behind off Chemar Holder.
Gabriel then sent back Ross Taylor (9) and the score read 78/3 in 20.3 overs. Nicholls joined Will Young and the duo added 70 runs for the fourth wicket to shown signs of recovery. But just as they were looking to take the game back into their bag, Gabriel removed Young (43) to pick his third wicket of the day. Nicholls then stitched decent partnerships with Watling and Mitchell to help the side cross the 250-run mark.
For Windies, Garbriel returned with the figures of 3-57 in his 18 overs while Chemar Holder grabbed two scalps.
Brief scores: New Zealand 294/6 (Henry Nicholls 117*, Will Young 43; S Gabriel 3/57) vs West Indies (ANI)