'Over the moon': Jurgen Klopp on Liverpool's return to training 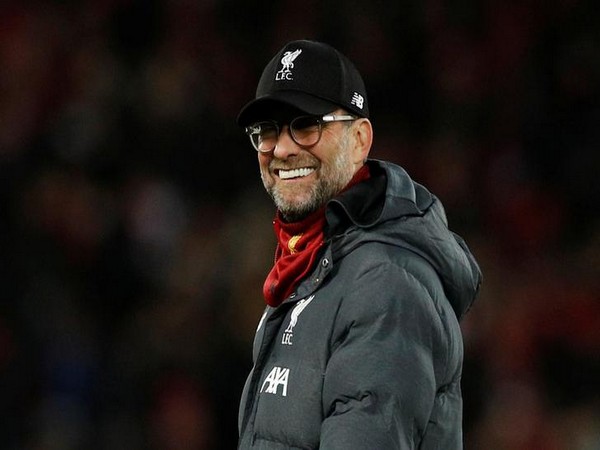 Liverpool [UK], May 20 (ANI): Liverpool manager Jurgen Klopp said that he is over the moon as his team can now start training.

The Premier League has been suspended since March due to the coronavirus pandemic and the organisers of the competition are looking to restart the league in June.
"When we start, it goes really again for everything. The competition will make the intensity," he told the club's official website after saying he was 'over the moon' to learn the club could return to training," the official website of Liverpool quoted Klopp as saying.
"So, it's not about, 'Oh, Liverpool have to win two games'. By the way, we have to win two games when we start - it's not 'only two', it's two. It's not less or more," he added.
Before the suspension of the Premier League, Liverpool just needed two more wins to win the 2019-20 edition of the league.
It is currently 25 points clear of the second-placed Manchester City.
"We have to win them, it's not that we want to win the last two or whatever and come through somehow. We want to play the best possible football, better than other teams fighting for the Champions League, fighting to stay in the league," Klopp said.
"We have to do it, unfortunately, without the best boost in the world and the best kick in your ass in the right moment in the world, from the Anfield crowd," he added.
On Monday, the shareholders in the Premier League voted unanimously to return to small-group training from May 19.
All the clubs agreed that this was the first step towards restarting the Premier League which has been suspended since March due to the coronavirus pandemic.
However, on Tuesday, the restart plans of the Premier League received a big blow as six people across three clubs tested positive for the coronavirus. (ANI)