Pakistan defeats Afghanistan by six wickets in U-19 World Cup 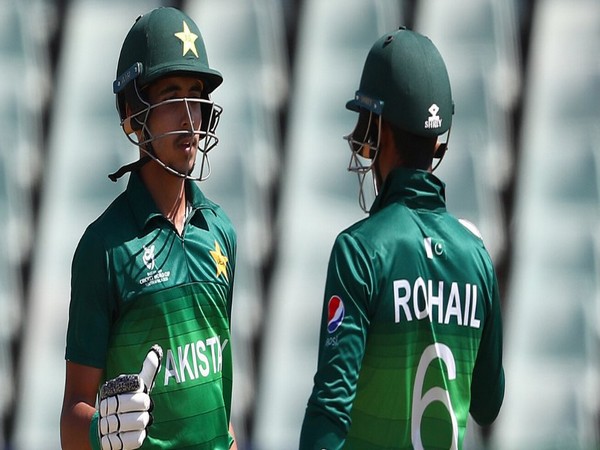 Benoni [South Africa], Jan 31(ANI): Pakistan defeated Afghanistan by six wickets and secured the place in the semifinals of the International Cricket Council (ICC) U-19 World Cup here on Friday.

Chasing 190, Pakistan got off to a good start as openers put on 61 runs for the first wickets.
After the dismissal of Haider Ali (28), Rohail Nazir joined Mohammad Huraira at the crease and the duo partnered for 56 runs. The side lost three wickets in the middle overs, reducing the side to 127-4. Mohammad Huraira was run out on 64 while Rohail Nazir and Fahad Munir got out after playing knocks of 22, and 2 respectively.
Qasim Akram and Mohammad Haris had a partnership of 63 runs and took the side over the line. Akram remained not out on 25 while Haris played an unbeaten knock of 29 runs.
Earlier after opting to bat first Afghanistan got a quick start as Ibrahim Zadran and Farhan Zakhil put on 41 runs for the first wicket. Tahir Hussain dismissed Zadran (11) in the seventh over. After adding five runs to the scoreboard, Imran (4) got out, reducing the side 46-2.
Rahmanullah then joined Zakhil and both players had a brief partnership of 26 between them. Zakhil got out after playing a knock of 40 runs while Rahmanullah made 29 runs.
Afghan side kept losing wickets at regular intervals and at one point were at 152-8. Abdul Rahman got out after playing a vital inning of 30 runs taking the side to 189 in 50 overs.
Pakistan will next take on arch-rival India in semifinals on February 4. (ANI)