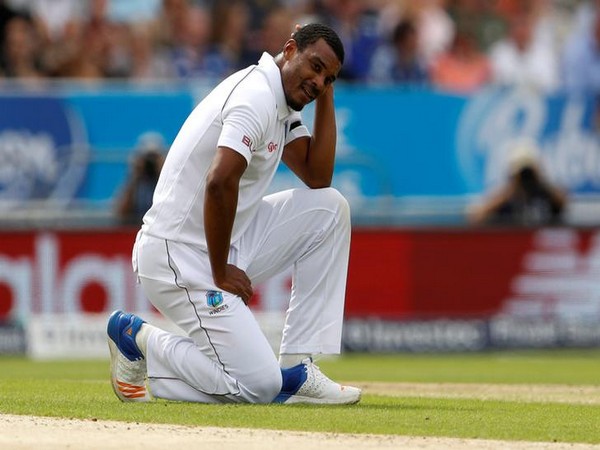 Manchester [UK], June 23 (ANI): West Indies coach Phil Simmons has said that Shannon Gabriel may join the side's squad for the Test series against England as the pacer is bowling as fast as he has seen him for a while.

England and West Indies will be playing three Test matches behind closed doors, beginning July 8.
Gabriel was named as part of the reserve squad for the tour of England as he was seeking to prove his fitness following an ankle injury, however, now the pacer might be added to the actual squad.
"Yes, there is a possibility of Shannon Gabriel joining the touring party. He is one of West Indies' prominent fast bowlers coming back from injury and we just had to make sure that he was fit enough to work through the tour. The last week he's been at full tilt and he looks fit. He looks good. He's bowling as fast as I've seen him for a while so he's ready and close enough to the Test match," ESPNCricinfo quoted Simmons as saying.
"When leaving home 14 were named in the squad. Because of Shannon coming back from his injury, we had to let him get a little bit further and see how he is and then we'll decide whether to make it a 15-member squad. After that, injuries might be the cause of changes. The top three bowlers speak for themselves. Jason Holder is the number one ranked all-rounder in the world in Test cricket, Kemar Roach and Shannon Gabriel are high up on that fast bowling list in the ICC rankings. That shows you there's quality there," he added.
West Indies will be playing their first warm-up match, beginning later today. While that inter-squad match may feature teams of more than 11 players and could see some flexibility around conventional playing arrangements.
After this three-day game, West Indies will play a four-day first-class match, and that fixture may see Windies playing their first-choice Test team.
The England-Windies Test series will be held at Hampshire's Ageas Bowl and Lancashire's Emirates Old Trafford, which have been chosen as bio-secure venues.
The proposed dates for three Tests are:
First Test: July 8-12 at Ageas Bowl
Second Test: July 16-20 at Emirates Old Trafford
Third Test: July 24-28 at Emirates Old Trafford
All international cricket has been suspended since March due to the coronavirus pandemic. This series will mark the return of international cricket.
The ICC has also confirmed interim changes to its playing regulations, which include the ban of saliva to shine the ball and allowing replacement of players displaying symptoms of COVID-19 during a Test match. (ANI)