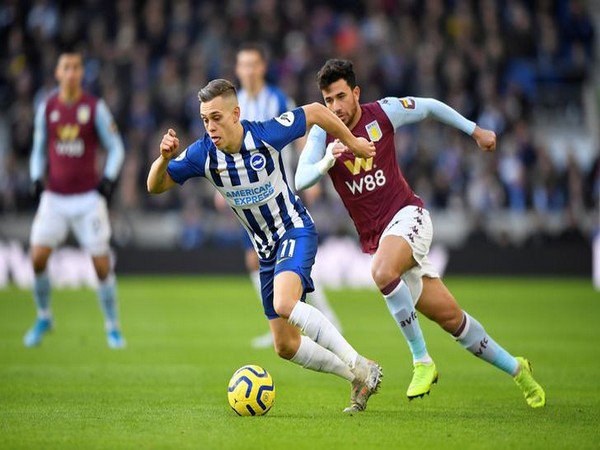 Brighton [UK], Jan 18 (ANI): Aston Villa held Brighton to a 1-1 draw on Saturday in the ongoing Premier League at the Falmer Stadium here.

The hosts played aggressively with the start and enjoyed the possession in the game. Aston Villa's Danny Drinkwater was awarded the yellow card for slicing Neal Maupay down towards the middle of the field.
Leandro Trossard broke the shackles for the hosts in the 39th minute of the game as he scored the goal in a counter-attack. Four minutes later, Lewis Dunk received an eighth yellow card of the season after the defender hauled visitors' Anwar El Ghazi.
Both sides went for the interval with a 1-0 scoreline in favour of Brighton.
Jack Grealish scored the equalizers for the Aston Villa in the 75th minute. Grealish finished the ball in the top-left corner after getting cross from Douglas Luiz.
Both sides tried to take lead in the match but no further goals were scored and the match ended with a scoreline of 1-1.
The Brighton will next take on Bournemouth on January 22 while Aston Villa will meet Watford on January 22. (ANI)