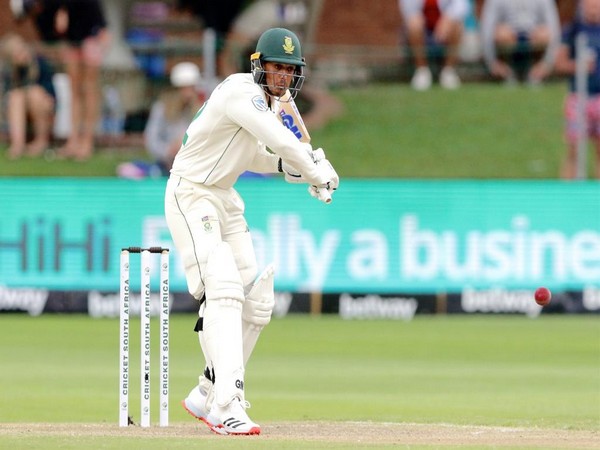 De Kock is unbeaten at 61 runs along with all-rounder Vernon Philander 27*.
England spinner Dominic Bess clinched his first five-wicket and dismantled the top-five batsmen of the hosts.
South Africa were at 113/5 in 43.2 overs at lunch. The post-lunch session on day three was delayed due to rain.
Bess achieved the feat during the ongoing third match against South Africa. He also returned to the best innings figures for an England spinner at Port Elizabeth.
Playing his fourth Test for England, the 22-year-old off-spinner put Proteas in trouble and scalped Pieter Malan (18), Zubayr Hamza (10), Dean Elgar (35), skipper Faf du Plessis (8), and Rassie van der Dussen (24).
Anrich Nortje (18) was scalped by Ben Stokes, reducing the home side to 154/6 in 62.4 overs.
Earlier, Centuries from Ben Stokes and Ollie Pope helped England to reach a commanding position on day two and declared their innings after smashing 499 for the loss of nine wickets.
Resuming the day two from 224/4, Stokes and Pope provided England with a solid start. The duo stitched a 203 run stand and smashed 120 and 135 runs respectively.
Dane Paterson dismissed Stokes in the 124th over to provide a much-needed breakthrough. Pope continued his splendid batting display and helped England put on a massive 499 in the first innings.
In response, South Africa ended the day at 60/2 before rain played a spoilsport. (ANI)