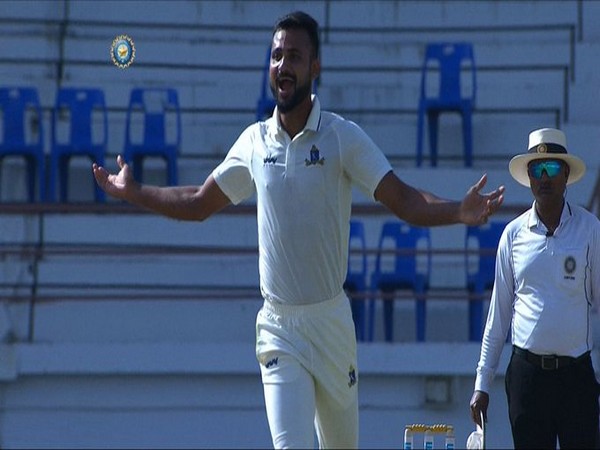 Bengal ended day three at 134/3 after bundling out Saurashtra for 425 in the first innings.
Bengal's openers Sudip Kumar Gharami (26) and Abhimanyu Easwaran (9) enabled the side to get off to a steady start as they put on 35 runs for the first wicket, however, Saurashtra staged a comeback as the hosts managed to send both batsmen back to the pavilion.
Easwaran's dismissal sparked outrage as he was given out to a ball that seemed to be going down the leg-side. He opted for a review, but the limited use of DRS in the finals, replays showed that the ball was a fair delivery with the impact in front of leg-stump. There was no ball-tracking available, and as a result, the on-field decision remained intact.
Manoj Tiwary and Sudip Chatterjee then retrieved the innings for Bengal as the duo put on 89 runs for the third wicket, but as soon as Bengal started to gain an upper hand, Chirag Jani sent Tiwary (35) back to the pavilion in the 53rd over, reducing Bengal to 124/3.
Chatterjee and Wriddhiman Saha ensured that the side does not lose any more wickets before the close of play on day three. Chatterjee and Saha are currently unbeaten on 35 and 4 respectively.
Resuming day three at 384/8, Saurashtra lost its ninth wicket early as Chirag Jani (14) was sent back to the pavilion by Akash Deep in the 161st over of the innings.
Jaydev Unadkat who came out to bat last, formed a crucial 38-run stand with Dharmendrasinh Jadeja, taking Saurashtra's total past the 420-run mark.
Shahbaz Ahmed dismissed Unadkat (20) in the 171st over of the innings, to bowl out Saurashtra for 425 runs. For Bengal, Akash Deep scalped four wickets. (ANI)