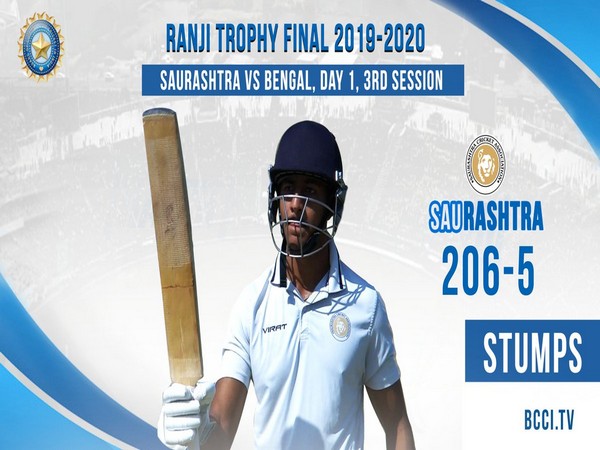 Rajkot (Gujarat) [India], Mar 9 (ANI): Half-centuries from Avi Barot and Vishvarajsinh Jadeja guided Saurashtra to post a total of 206/5 against Bengal on day one of the ongoing Ranji Trophy final here on Monday.

The home side won the toss and chose to bat in the tournament final. Openers Harvik Desai and Avi Barot stitched an 82 run stand for the first wicket. Desai got out after scoring 38 runs in the 38th over.
Jadeja joined Barot in the middle and built a 31 run stand for the second wicket. Akash Deep dismissed Barot in the 49th over and the side got reduced to 113/2.
Arpit Vasavada and Jadeja had a partnership of 50 runs before the latter became the victim of Deep. Sheldon Jackson failed to leave a mark on the scoreboard and played a brief knock of 14 runs.
Indian batsman Cheteshwar Pujara, who came to bat at number 6, got retired hurt due to dehydration after scoring five runs.
For Bengal, Akash Deep was the pick of the bowlers as he bagged three wickets. Ishan Porel and Shahbaz Ahmed took one wicket each.
Bengal are a step away from realising their Ranji Trophy dream in 2020. The side is looking to end their 30-year-old drought. (ANI)