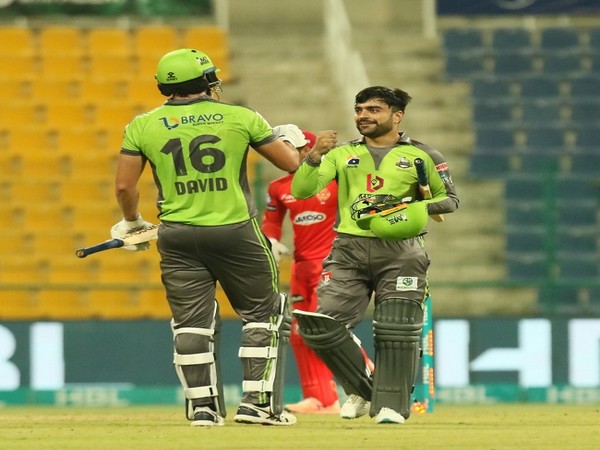 Qalandars required 16 from six when Shadab Khan, the United captain, brought Hussain Talat into the attack to deliver his only over of the match.
Rashid welcomed the right-arm pacer with three consecutive fours and stole two runs on the fourth delivery. The last two balls brought two singles to help Qalandars registered their fourth win as the Pakistan Super League (PSL) season six resumed in Abu Dhabi.
United looked in contention after Hasan Ali gave away only seven runs and dismissed Ben Dunk in the penultimate over. Hasan bowled four dots before Tim David finished it with a six.
Qalandars' innings were anchored by their captain Sohail Akhtar who top-scored in the match with a 30-ball 40 and smashed five fours and a six.
Sohail's knock included a 38-run partnership for the third wicket with Mohammad Hafeez (29 off 25, three fours) that steadied Qalandars' innings after losing their first two wickets for 44 runs in 7.4 overs.
In the next over, Fawad Ahmed helped United bounce back in the contest as he trapped Sohail in front of the stumps. David, however, maintained his calm in the crucial moments and scored a handy 23 not out off 15.
Sohail maintained the trend of fielding first after winning the toss and Qalandars were provided an excellent start by Australian pacer James Faulkner as he picked wickets in his first three overs in the powerplay. The left-arm pacer finished with three wickets for 32 from four overs.
Faulkner was also involved in the fourth dismissal as he caught Usman safely at deep third-man when the Australian top-order batsman cut Rauf in the seventh over.
Iftikhar Ahmed and Talat tried to steady the ship, however, their partnership was broken by young pacer Ahmed Daniyal in the 12th over as United lost half of their batting lineup for 72 runs.
The pressure continued to mount on the batting side thanks to Rashid's mysterious leg-spin. The Afghanistan spinner accounted for Talat in the next over after Iftikhar's wicket.
Faheem Ashraf, however, rose to the occasion and provided the desired boost in the death overs during his 24-ball 27 that set 143 for nine.
In the death overs with 99 runs on board and three wickets intact, United managed only 44 runs at the loss of two wickets hence scoring 143 in the allotted 20 overs. This was Qalandars' just third win over United in 11 matches and took them to the top of the points table.
Brief Scores: Islamabad United 143/9 (Faheem Ashraf 27; James Faulkner 3-32); Lahore Qalandars 144/5 (Sohail Akhtar 40; Hasan Ali 2-27) (ANI)