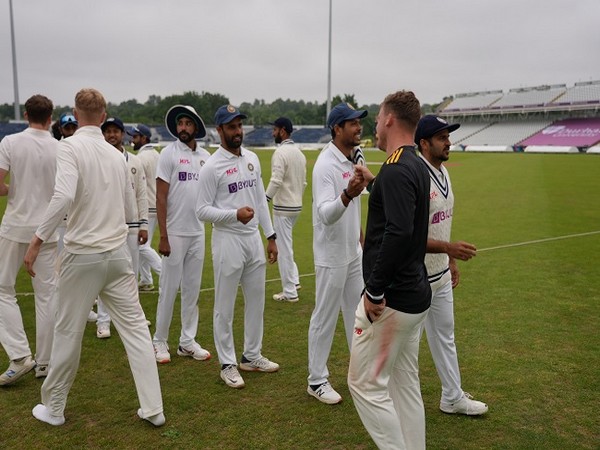 County Select XI needed 284 runs to win on the final day in the second innings but the side scored 31 in 15.5 overs to walk away with a draw after India had declared their innings on 192/3.
Resuming their first innings on Thursday, County Select XI weren't able to add any run as they were bowled out at 220/10 in the first half an hour of play.
Cheteshwar Pujara and Mayank Agarwal opened the batting for India in the second innings and stitched an 87-run stand for the first wicket.
While Pujara scored 38, Mayank got out three runs short of his half-century. Hanuma Vihari and Ravindra Jadeja then carried the Indian innings, stitching an 84-run partnership.
While Vihari scored an unbeaten 43, Jadeja walked off after hitting a fine half-century off 77 deliveries. The visitors declared their second innings on 192-3 and set a target of 284 runs for a win.
Jake Libby and Haseeb Hameed both made sure that County Select XI doesn't lose a wicket as the match ended in a draw.
Brief Scores: Indians 311 and 192/3 d (Ravindra Jadeja 51, Mayank Agarwal 47; Jack Carson 2-64) vs County Select XI 220 and 31/0 (Jake Libby 17, Haseeb Hameed 13 ) (ANI)