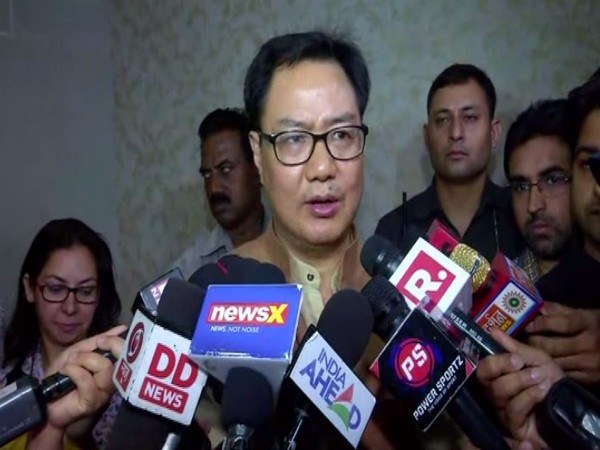 Rani trounced Thailand's Chuthamat Raksat in the semifinal match to secure a final berth. She became the first Indian boxer after 18 years to reach the finals on debut. Mary Kom in 2001 had reached the finals.
Rani defeated her opponent 4-1 in the 48kg category to enter in the final of the tournament. With this win, she became the first Indian to enter in the final in the ongoing Championships. She will now compete for the gold medal bout.
"Congratulations Manju on becoming the first women boxer after Mary Kom in 18 years to reach the finals of World Boxing Championship on debut. We are proud of you and waiting for the Finals. #PunchMeinHiaDum," Rijiju tweeted.

Six-time world champion Mary Kom was knocked out of the tournament after facing a defeat in the semifinals by Turkey's Busenaz Cakiroglu 4-1 in the 51kg category. As a result, she settled with a bronze medal.
After the match, Kom was surprised at how she was scored by the match officials.
She took to Twitter and shared the entire match's video. The 36-year-old captioned the post as, "How and why. Let the world know how much right and wrong the decision is... @KirenRijiju @PMOIndia."
Rijuju also retweeted his official handle's (Kiren Rijiju Office) tweet, "Our women boxers are on a roll, even as Majestic @MangteC wins the 8th medal in a world championship, setting a record. Debutant Jamuna Boro wins a bronze and Manju fights for gold. @KirenRijiju congratulates the super women for making us proud and inspiring girls to play sport." 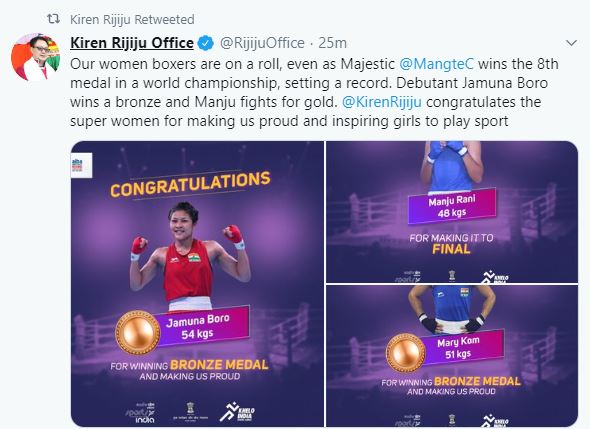