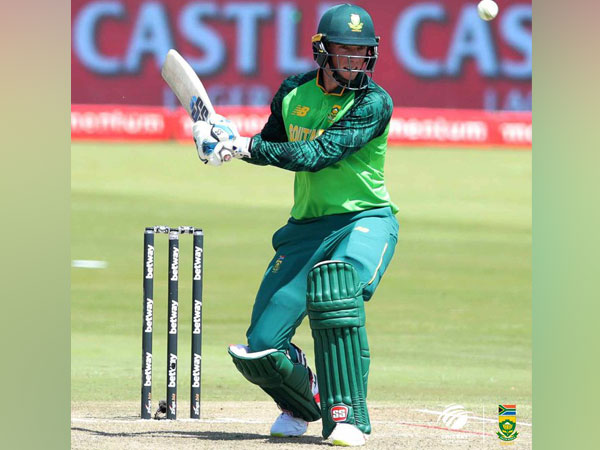 Centurion [South Africa], April 7 (ANI): Proteas batsman Rassie van der Dussen has been ruled out of the series-deciding third ODI against Pakistan at the SuperSport Park on Wednesday.

"The 32-year-old suffered a Grade One left quadriceps muscle strain. The Proteas medical team will evaluate and assess his progress as the T20 series approaches and make a final call on his participation in due course," Cricket South Africa (CSA) said in an official statement on Wednesday.
In the third ODI, South Africa would be without the likes of Kagiso Rabada, Anrich Nortje, David Miller as they all have arrived in India for the upcoming Indian Premier League (IPL).
The three-match series currently stands level at 1-1 with the series decider slated to be played later on Wednesday.
Since 2010 and before the ongoing series, Pakistan had a 6-7 win-loss ODI record in South Africa, and in 2013-14 they had become the first side from the subcontinent to have won a bilateral ODI series in South Africa.
Earlier, Pakistan head coach Misbah-ul-Haq has said that it would be a remarkable achievement if his side manages to win the three-match ODI series against South Africa.
"The way we played the first two games, and won the first ODI, the team is confident. This team has now started to believe they can win or reach a winning position out of nowhere and the previous game was one big example. I have always said that it is a young team and for them, every win is important," ESPNcricinfo quoted Misbah as saying.
"Now it is a decider in South Africa's conditions and if we win, it will be a remarkable achievement not only in the series but in another perspective. It is really important for the sake of team confidence," he added. (ANI)