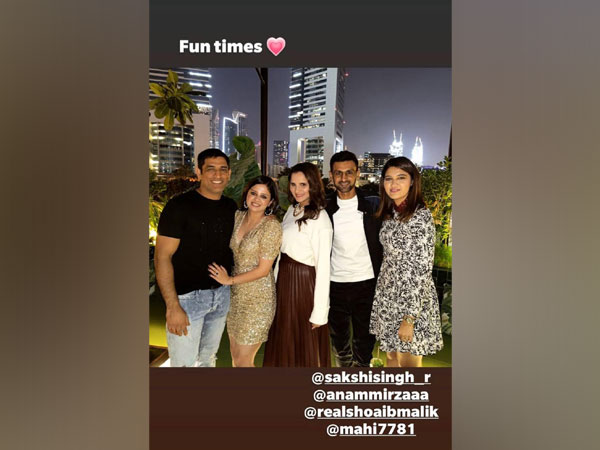 Indian tennis player, Sania, posted a picture on Instagram Story, featuring herself, Shoaib, Sakshi and MS Dhoni. Sania wrote "fun times" on the post.
Recently, the Indian Premier League (IPL) franchise Chennai Super Kings (CSK) posted a video of Sakshi on Twitter in which she revealed that she was strictly against Dhoni's 'orange hair colour' look.
"Luckily I didn't see him with that long hair. If I had met him when he had that orange long hair I wouldn't even have looked at him," Sakshi had said.
"There has to be aesthetics. It suited on John but Mahi with long hair and orange colour on top was like...(Sakshi rolls her eyes)," she had added.
Dhoni tied the knot with Sakshi on July 4, 2010, a year before he led India to the World Cup title. The former Indian skipper is among the most successful captains in world cricket. It was under his leadership that India lifted the ICC Cricket World Cup in 2011 after having led India to triumph in the ICC World T20 in its maiden edition of the tournament held in 2007 in South Africa.
With India winning the ICC Champions Trophy in 2013 in England, Dhoni became the first and is still the only captain to date to have won all three ICC trophies.
Dhoni announced his retirement from international cricket in August this year. He played in the recently-concluded IPL but the franchise witnessed a very poor season. Mumbai Indians won the 13th edition of the league. (ANI)