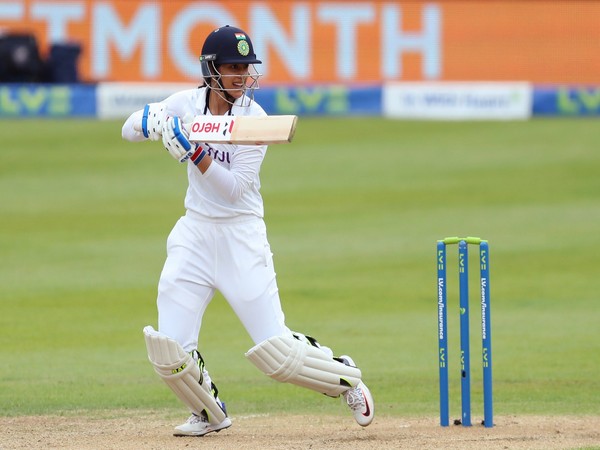 New Delhi [India], July 18 (ANI): Indian Women's team opening batter Smriti Mandhana has stated that school is the perfect time to start playing cricket as one can pick up the sport very well during that age.

At the age of nine, Mandhana was already representing the under-15 Maharashtra women's team. And at the age of 11, she was part of the state's under-19 team. In October 2013, she became the first Indian woman to achieve a double-hundred in a one-day game. In the same year, she secured a spot in the Maharashtra senior team and also made her India team T20 debut.
Talking to Jatin Sapru after winning the Red Bull Cricket Challenge, the Indian women's cricket team opening batter talked about the importance of school on the game. She said in a release: "Yeah, definitely. I think that school is the perfect time to start playing cricket. When you're between seven and 14 years old, that's when you can pick up a sport really well. I think school is a perfect time. I remember when I was in school - I loved cricket since I was five - but it was very difficult for me to find playing partners. My friends didn't play cricket and there wasn't anything for women's cricket at the school level. So I used to mostly play with the boys."
Talking about the girls who get inspired by her, the 25-year-old star said," Firstly, I'd like to thank them. I feel to inspire someone the biggest achievement. Even if I could inspire four girls to pick up a bat and ball to play cricket, it's an achievement for me."
"Just one message I'll pass on is what I've learnt and applied in my cricket life, and that is to enjoy each moment. Enjoy each practice session. Try to go out there and do it for myself. Many times, you do something just for the sake of it or because your coach or your parents told you to. But I don't think that work shows in the results. When you do it for yourself and enjoy the process, the results come automatically. That's what I try to do. I try and enjoy each ball I play. Even when I'm out of form - although it's much harder - I try and enjoy that whole practice session. It doesn't guarantee a 100% result, but it's the best possible chance to convert it into a result," she added.
In 2018, Smriti became the third Indian woman to score 1000 T20I runs. She received the Arjuna Award for her achievements, as well as the Rachael Heyhoe-Flint Award for the best female cricketer of the year, and was named the ODI Player of the year.
In 2019, she became India's youngest T20 captain, claimed the awards of International Woman Cricketer of the Year, and became the third-fastest female cricketer to score 2,000 ODI runs. Smriti is one of the world's elite cricketers and plays in a league of her own. She is her own greatest competition. (ANI)