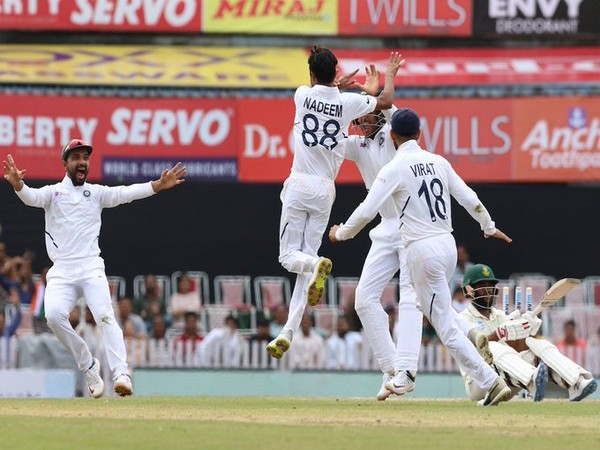 On the third day of the final Test, Nadeem sent African batsman Temba Bavuma back to the pavilion. Wicketkeeper Wriddhiman Saha took the bails off as Bavuma failed to put his foot back in the crease.

Nadeem replaced Kuldeep Yadav in the squad for the final Test after the latter complained about the left-shoulder pain.

South Africa started their innings from 9/2 today, but for century-plus partnership between Temba Bavuma and Zubayr Hamza they failed to create any impact with the bat.

Earlier, India opener Rohit Sharma's double ton and Ajinkya Rahane's 115 guided the team to 497/9 in the first innings after which the hosts declared their innings.

The flamboyant batsman Rohit became the 24th Indian to score a double ton in the longest format of the game. Displaying a scintillating performance, the right-handed batsman smashed 28 fours and six sixes in his innings before getting out at 212.
India have a 2-0 lead in the series and are in a strong position in the ongoing game.