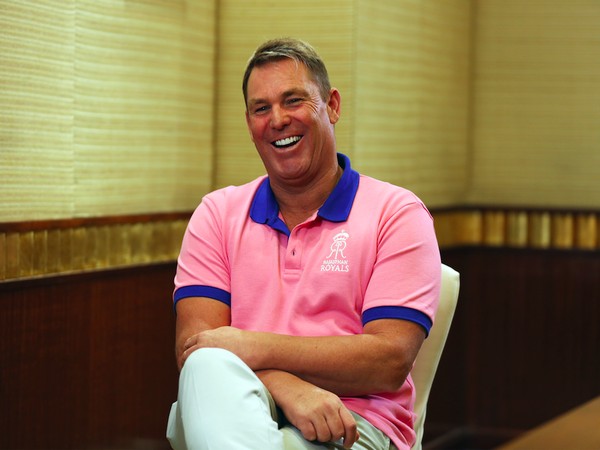 Dubai [UAE], September 13 (ANI): Rajasthan Royals on Sunday announced that former Australian spinner Shane Warne will be its brand ambassador for the second year in a row.

Along with it, Warne will also essay the role of team mentor for the upcoming edition of the tournament. Shane's trip to UAE will see him working with the Royals management team to strengthen their international fanbase and wow the Royals existing and potential sponsors with his exceptional cricketing knowledge and foresight.
The IPL 2020 is slated to be played from September 19-November 10 in the UAE across three venues -- Dubai, Abu Dhabi, and Sharjah.
"On my dual role, it's always a great feeling to be back with Royals, my team, my family. It's exciting to be working across all elements of this franchise that I love. We have worked towards our vision of becoming a global team that fans around the world love and follow," Warne said in an official release issued by Rajasthan Royals.
"This season I am looking forward to working as a Team Mentor and joining up with an excellent backroom staff in Zubin Bharucha and Andrew McDonald. Hopefully, we can have a successful season and achieve big things in the coming months," he added.
Warne had led the Rajasthan Royals to an IPL title win in its inaugural edition in 2008. As a Team Mentor, Shane will work alongside Head Coach Andrew McDonald. He has been teammates with Andrew McDonald from 2003-07 for Victoria.
He will also join up with Zubin Bharucha, Head of Cricket at Rajasthan Royals, who was with Warne during the inaugural season and together won the tournament back in 2008.
Steve Smith would be leading Rajasthan Royals in the upcoming edition of the IPL.
Adding on the appointment of Shane Warne, Rajasthan Royals COO Jake Kush McCrum said: "He is one of the all-time greats of the game and is very special to us here at Rajasthan Royals. Shane is someone who exemplifies our vision of driving innovation and we're delighted to have him with us supporting both the growth of our franchise globally, while also motivating our players for success on the field."
Mumbai Indians and Chennai Super Kings will be locking horns in the opening match of the IPL 2020 on September 19 in Abu Dhabi. Rajasthan Royals will take on Chennai Super Kings in their opening match of the tournament on September 22. (ANI)