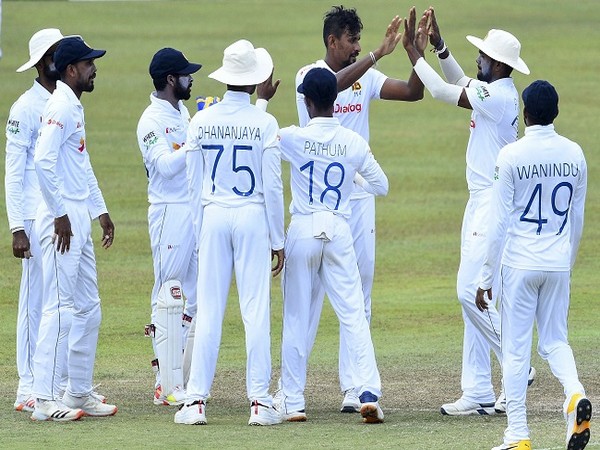 Pallekele [Sri Lanka], April 25 (ANI): The first Test between Sri Lanka and Bangladesh ended in a draw after the last session of the game was washed out due to rain on Sunday.

Bangladesh picked up five wickets in the morning session of Day Five as Sri Lanka declared their innings at 648/8, leading by 107. In reply, Bangladesh scored 100/2 in the second essay before persistent rain forced the umpires to call off the game.
Sri Lanka skipper Dimuth Karunaratne hit a double ton while Dhananjaya de Silva scored a classy hundred as the hosts didn't lose a single wicket on Saturday. Sri Lanka had ended Day Four at 512/3.
On Day Five, Bangladesh got the breakthrough as Taskin Ahmed cleaned up de Silva (166), breaking the solid 345-run partnership between him and Karunaratne.
Minutes later, Taskin took another wicket as Karunaratne (244) departed after hitting the tenth highest score by a Sri Lanka batsman in Test cricket.
Sri Lanka lost a flurry of wickets in the first session which saw the hosts decalring at 648/8 after going into the lunch with a lead of 107 runs.
Bangladesh got off to bad start in the second innings as the visitors lost two quick wickets. Suranga Lakmal removed Saif Hassan and Najmul Hossain to reduce Bangladesh to 27/2. But Tamim Iqbal and Mominul Haque took the visitors to 100/2 at Tea, after which no play was possible due to incessant rains.
The second and final Test match between the two teams will begin on April 29 at the same venue.
Brief Scores: Bangladesh 541/7d and 100/2 (Tamim Iqbal 74*; Suranga Lakmal 2-21); Sri Lanka 648/8 d (Dimuth Karunaratne 244, Dhananjaya de Silva 166; Taskin Ahmed 3/112). (ANI)