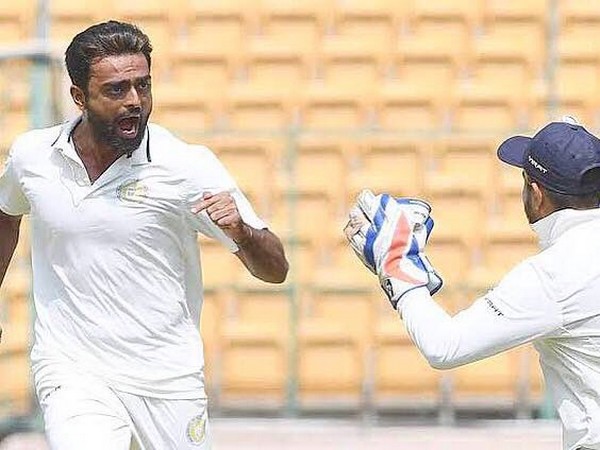 New Delhi [India], June 13: Indian left-arm pacer Jayadev Unadkat has taken a social media break after getting snubbed from the second-string Indian squad that will tour Sri Lanka in the month of July.

The BCCI on Thursday announced a 20 players squad with five net bowlers to play the 3-match ODI series and the 3-match T20I series against Sri Lanka in the month of July. Shikhar Dhawan will captain the young side and pacer Bhuvneshwar Kumar has been named as the vice-captain.
In the absence of regular players, many cricketers got their maiden call-ups however the selectors continue to overlook Unadkat who has been waiting to receive a call from the Indian team for almost three years now.
"I found my passion when I was a kid, inspired by watching all the greats of the gameplay with all their heart on the field. All these years later, I got to experience it myself. And above everything else, that never say die attitude that I saw in them and nurtured inside myself, stayed with me! When I was young, some labelled me as a raw, erratic bowler, an over-dreaming bloke coming from a small town," wrote Jaydev on Twitter.
"Slowly, their perception changed. and that's cos I changed. I matured. the highs, the lows, the enormous joy, the extreme disappointment! Oh, what would I have been without sport.
"This game has given me so much, and not for one moment, am I gonna repent on why not me, or when will my time come and what I have I done wrong. I have got my chances in the past & I will still get them. It will be when it will be!," he elaborated.
"At this point in my career, with all the useful experience that I've fortunately gathered, I'm only going to appreciate what comes my way and keep fighting till the very end. (and that's not gonna be soon, sure!). Maybe that could be taken as being soft, but then, I'll keep the ruthlessness and aggression for when I'm out there on the field."
Jayadev who took a record-breaking 67 wickets in the 2020 Ranji Trophy season, leading Saurashtra to their maiden triumph - has received tremendous support on social media after the snub be selectors from the upcoming Lankan tour.
"I am super grateful for your good wishes & support. Time to focus on my next game. and work even harder. Until then, social media detox mode on," signed off Unadkat.
The left-arm speedster, who plays for Rajasthan Royals in the IPL, made his India debut way back in 2010. Unadkat has played one Test, seven ODIs, and 10 T20s and last played for India in 2018. (ANI)