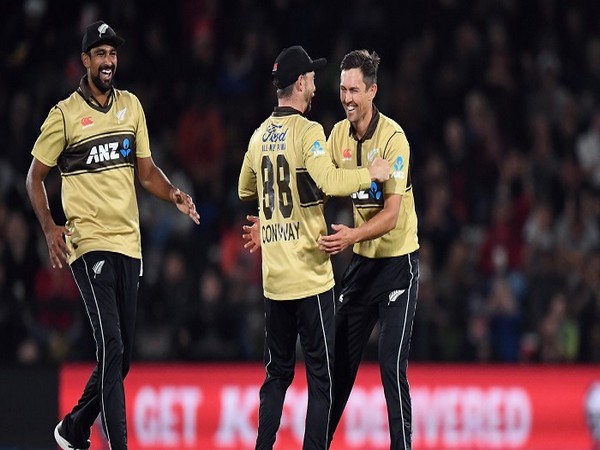 New Zealand thrashed Australia by 53 runs in the first T20I to take a 1-0 lead in the five-match T20I series. If Conway starred with the bat for New Zealand, it was an all-round bowling performance from the hosts that saw them clinch the game.
Australia had reduced New Zealand to 19/3 before Conway unleashed the beast within himself to hammer an unbeaten 99 off 59 balls and guided the hosts to 184/5.
The visitors never looked comfortable in the chase and kept losing wickets at regular intervals only to get dismissed for 131 runs. For New Zealand, Sodhi picked four while Boult and Southee scalped two wickets each.
Chasing 185 runs, Australia got off to the worst possible start as Tim Southee and Trent Boult both struck in their first overs. Southee ensured Finch's lean patch continued while Boult dismissed Josh Philippe in the second over.
Matthew Wade and Glenn Maxwell too didn't bother the scorers much and were soon in the dugout after Boult and Southee again wreaked havoc to reduce Australia to 19/4.
Mitchell Marsh and Marcus Stoinis tried rescuing Australia from the precarious position but spinner Ish Sodhi joined the party.
Sodhi came out firing on all cylinders and first broke the partnership of 37 runs between Marsh and Stonis and then dismissed Ashton Agar and Daniel Sams in the same over.
Marsh was the only batsman who got going for Australia but he too failed to convert a good start into a match-winning knock and was dismissed for 45.
Earlier after being asked to bat, New Zealand suffered an early jolt as Daniel Sams removed opener Martin Guptill for a duck off the third ball of the match.
If Guptill's poor form wasn't enough for the New Zealand players, the leading wicket-taker in the tenth season of Big Bash League (BBL) Jhye Richardson castled Tim Seifert in the third over to pile further misery on the Kiwis.
Skipper Kane Williamson's wicket in the next over was an insult to the injury as New Zealand lost three wickets before the completion of the Powerplay.
Conway then along with Glenn Phillips put the New Zealand innings back on track. The duo added 74 runs for the fourth wicket before Marcus Stoinis came in front of New Zealand's recovery.
Stoinis dismissed Phillips in the 13th over to reduce New Zealand to 93/4. Conway continued his fine form and completed his half-century in just 36 balls.
With seven overs left, Conway and James Neesham decided to go out all guns blazing on the Australian bowling attack. In the next three overs, the duo smashed 34 runs.
A fine partnership was broken by Richardson in the 17th over as he dismissed James Neesham but Conway continued his onslaught to steer New Zealand to 184/5 in the 20 overs.
Brief Scores: New Zealand 184/5 (Devon Conway 99*, Glenn Phillips 30; Jhye Richardson 2-31); Australia 131 (Mitchell Marsh 45, Ashton Agar 23; Ish Sodhi 4-28) (ANI)