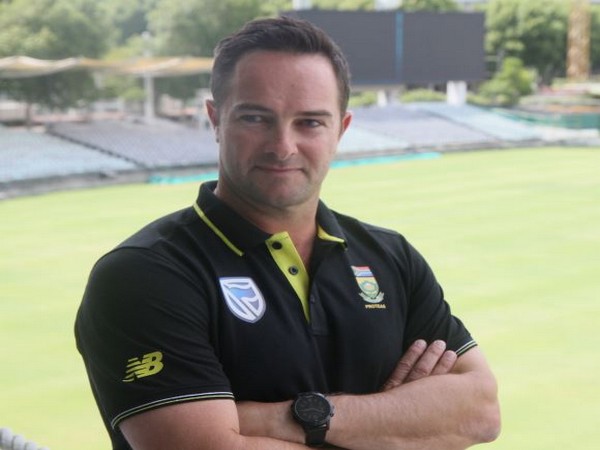 Cape Town [South Africa], November 19 (ANI): South Africa coach Mark Boucher expressed that during the upcoming England series, the team will extend support to the issues that the country's president Cyril Ramaphosa has raised, meaning that the national side will not take a knee to show support for the Black Lives Matter (BLM) movement.

Players will consider wearing a black armband to show solidarity with the fight against gender-based violence and in memory of the victims of Covid19, in line with a call made by Ramaphosa to declare November 25-29 national days of mourning.
During the 3TC game in July, players and all support staff including the director of cricket Graeme Smith wore black arm-bands and took a knee before the match to extend support to the Black Lives Matter (BLM) movement.
"I have spoken to the guy (Lungi Ngidi) who was driving the whole movement within our set-up, he is pretty happy that we have done what we needed to do, in particular at that (3TC) game. There are a couple of other issues that our president has raised going forward with regards to gender-based violence and the victims of Covid19. We are going to be addressing this with the team so if there is a black armband to wear, we will probably be wearing it because of the president's call," ESPN Cricinfo quoted Boucher as saying.
Earlier this year, 31 former and current Proteas cricketers had signed a letter showcasing their support towards the Black Lives Matter campaign and pacer Lungi Ngidi. Following this, Cricket South Africa (CSA), its board of directors and executive committee had reaffirmed their support towards the BLM movement, and its relevance in South Africa.
"We note the claims of discrimination and racism that have been made by current and former players and coaches, and we acknowledge that these are a part of the sport's past, and sadly, its present. We have to face the reality, as management and custodians of the game, that we need to come up with creative, tangible and meaningful ways to address this -- even more, than we have done already -- to make sure that they are not part of our future," the CSA had said in an official statement in July.
South Africa and England are slated to lock horns against each other in three T20Is and three ODIs, starting November 27. (ANI)