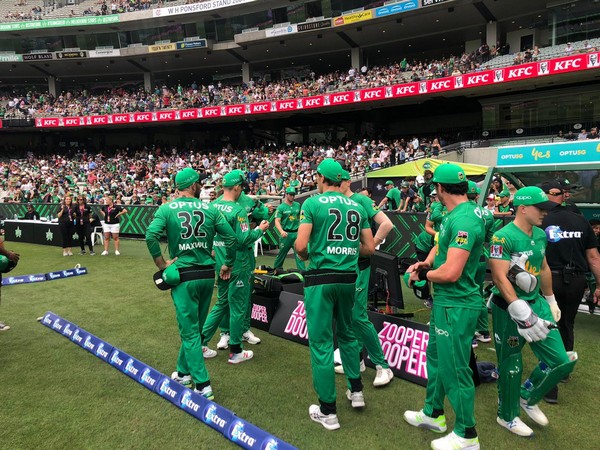 Chasing 142, Scorchers did not get off to a steady start as the side lost its opener Josh Inglis (12) in the third over of the innings. Liam Livingstone and Cameron Bancroft then put on 30 runs for the second wicket.
In the seventh over, Sandeep Lamichhane provided the breakthrough to Stars as he dismissed Livingstone (18). The visitors were given a major setback in the 10th over as Mitchell Marsh (11) was sent back to the pavilion, via a run-out, reducing Scorchers to 62/3.
Scorchers seemed to have been on track, but with 40 runs away from the target, Stars managed to get the breakthroughs of Bancroft (32) and Kurtis Patterson (20) to peg the visitors back.
Stars kept on taking wickets in the final overs, and in the end, they managed to go away with a 10-run victory.
Earlier, a spirited bowling performance enabled Scorchers to restrict Stars to just 141/6 in the allotted twenty overs.
Stars got off to a bad start as the side lost its opening three wickets with just 34 runs on the board. Marcus Stoinis (6), Nathan Coulter-Nile (7), and Nic Maddinson (3) all failed to leave a mark.
Skipper Glenn Maxwell then joined Hilton Cartwright in the middle and the duo put on 47 runs for the fourth wicket. But as soon as Maxwell (25) started to look for big shots, he was sent back to the pavilion in the 14 over, restricting to 81/4.
Stars kept on losing wickets at regular intervals, but Cartwright (58*) enabled the side to go past the 140-run mark.
Brief Scores: Melbourne Stars 141/6 (Hilton Cartwright 58, Glenn Maxwell 25, Matthew Kelly 3-27) defeat Perth Scorchers 131/9 (Cameron Bancroft 32, Kurtis Patterson 20, Nic Maddinson 3-24) by 10 runs. (ANI)