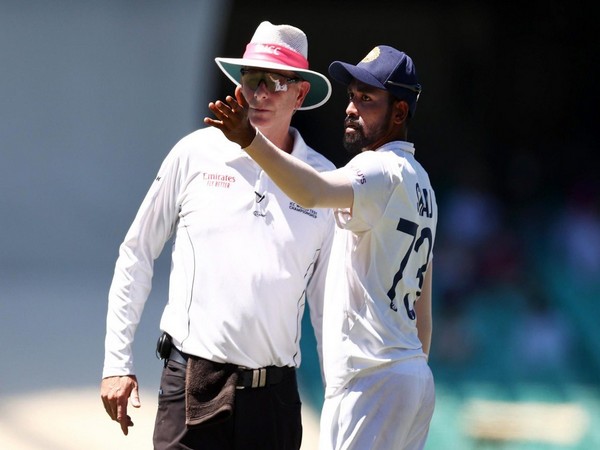 New Delhi [India], January 11 (ANI): Former legendary batsman Sachin Tendulkar condemned the racial abuse subjected to the Indian team players in the ongoing third Test and said that "the sport is meant to unite us".

Reacting to the racial abuse that has been dished out by the Australian crowd to pacers Mohammad Siraj and Jasprit Bumrah at Sydney Cricket Ground (SCG), Tendulkar took to Twitter and said cricket never discriminates and those who do not understand this should not come to stadiums.
"SPORT is meant to UNITE us, not DIVIDE us. Cricket never discriminates. The bat and ball recognises talent of the person holding them - not race, colour, religion or nationality. Those who do not understand this have NO PLACE in a sporting arena. @ICC @BCCI @CricketAus #racism," Tendulkar tweeted.
The Indian team on Saturday lodged an official complaint after the crowd at the SCG racially abused pacers Jasprit Bumrah and Mohammed Siraj over the second and third day of the ongoing Pink Test. The crowd did not stop on day four of the ongoing Pink Test as Siraj along with India skipper Ajinkya Rahane had a word with umpire Paul Reiffel regarding the unruly behaviour of the crowd.
Visuals on television indicated that there were some words spoken for Siraj who was fielding near the boundary rope. Both the umpires then had a word with each other and the police then asked a group of men to leave the stand.
The Board of Control for Cricket in India (BCCI) and Cricket Australia have agreed that action needs to be taken against the offenders to send out a "strong message" that racism does not have a place in cricket, BCCI Treasurer Arun Singh Dhumal had said on Sunday.
Sean Carroll, Cricket Australia's Head of Integrity and Security, on Sunday said that strict action will be taken against the section of fans who hurled racial slurs at Indian pacers Siraj and Bumrah.
"Cricket Australia condemns in the strongest terms possible all discriminatory behaviour. If you engage in racist abuse, you are not welcome in Australian cricket," said Carroll, Cricket Australia's Head of Integrity and Security in an official release.
"CA is awaiting the outcome of the International Cricket Council's investigation into the matter reported at the SCG on Saturday. Once those responsible are identified, CA will take the strongest measures possible under our Anti-Harassment Code, including lengthy bans, further sanctions, and referral to NSW Police. As series hosts, we unreservedly apologise to our friends in the Indian cricket team and assure them we will prosecute the matter to its fullest extent," he added.
The International Cricket Council (ICC) also "strongly condemned" reported incidents of racism and have offered Cricket Australia all necessary support in investigating the incidents. "Under the ICC Anti-Discrimination policy, Cricket Australia will now be required to investigate the issue and provide a report to the ICC on the incident and any action taken to ensure the issue has been dealt with appropriately," ICC said in a statement. (ANI)