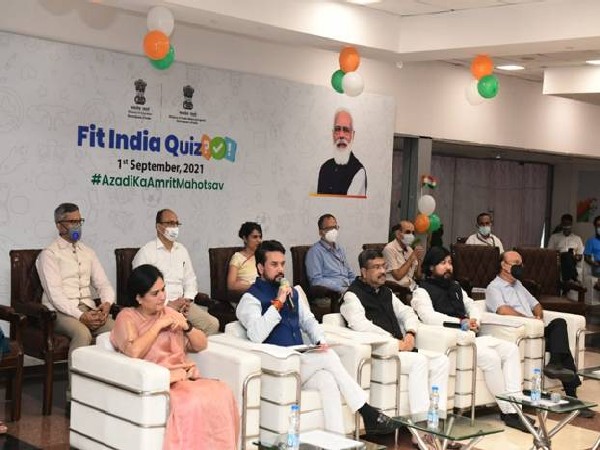 New Delhi [India], September 14 (ANI): The Ministry of Youth Affairs and Sports has announced that the first 2 lakh students nominated by 1 lakh schools can now be registered free for the nationwide India Quiz.

"The Fit India Quiz, the first-ever fitness and sports quiz in India for school children has been made even more attractive for participants," read a PIB release.
According to PIB, every school can nominate a maximum of 2 students for free for the quiz on first cum first basis.
This decision was announced by the Union Minister of Youth Affairs and Sports Anurag Singh Thakur to increase fitness and sports awareness among school children.
"The Fit India Quiz has been launched as part of the Fit India Movement envisioned by Prime Minister which has played a significant role in creating large scale awareness about the importance of leading a fit life," Anurag Thakur said in a statement.
"To motivate more students to join the Fit India Quiz, the participation fee for the 2 lakh students from the first 1 lakh schools has been waived off," he added.
Anurag Thakur, in the presence of Union Education Minister Dharmendra Pradhan, launched the Fit India Quiz, which is the first-ever nationwide quiz on sports and fitness, on September 1.
The nationwide quiz has a whopping Rs 3.25 crore as prize money with the National round telecast on Star Sports, according to PIB.
The quiz will have representations from every State/UT in the country and will be a mix of online and broadcast rounds.
The format has been designed in an inclusive manner wherein school students from across the country will get an opportunity to test their fitness and sports knowledge against their peers.
Details of participating in the Fit India Quiz is available on the Fit India website. (ANI)